Having an impact often depends on asking good questions. Listen to hear how the global phenomenon that is Earth Hour was born out of a question. 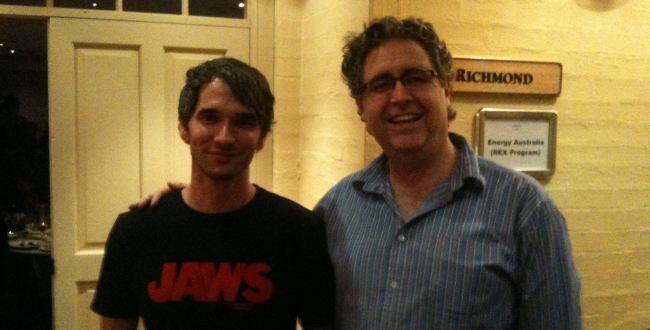 It’s Mark’s turn to share a story, and he chooses to share the story behind the founding of Earth Hour. Earth Hour is a global event held on a Saturday at the end of March every year, where participants across the globe turn out their lights for one hour to advocate for action against climate change.

Shawn and Mark first heard this story from Todd Sampson (pictured with Shawn above), who was part of the group that came up with the initial idea for the event. Todd uses the story to illustrate the importance of asking good questions.

Earth Hour is an event that occurs on a Saturday in late March every year. For one hour, participants switch off their lights in a show of support for actions that protect the planet from climate change.

The event was first held in 2007 and focused on one city—Sydney, where the idea behind the event was first conceived. Three to four million people participated. It was a big event, captured by extensive news coverage and powerful images.

In proceeding years, the event grew into a global phenomenon. In its fourth year, over one billion people in 128 countries and 4,000 cities participated. And, to this day, the event is still held every year.

In about 2012, Shawn and Mark ran a workshop at a conference in Western Sydney. That night, they attended a dinner at which Todd Sampson spoke about creativity.

Todd commented on the importance of asking good questions. He then proceeded to tell the room how he had attended a meeting with five people at a Sydney hotel in 2006. The purpose of the meeting was to answer the question, ‘How do you change people’s behaviour for the benefit of the planet without using fear?’ They came up with the concept for Earth Hour. Soon after, WWF (the World Wide Fund for Nature) was on board for the event to go ahead.