Hi, this is Paul. I just wanted to share with you a short blog on storytelling and events, and how you can look at your events. Whether it’s a launch event for a new strategy, or a change, or something smaller, you can look at your events through a storytelling lens, and make sure that as the event unfolds and progresses, you’re actually telling an engrossing story. If you’re in comms or responsible for a major launch event, there’s a lot of behind the scenes prep work, as you know, to develop that story and to make it interesting, which executives don’t always see. 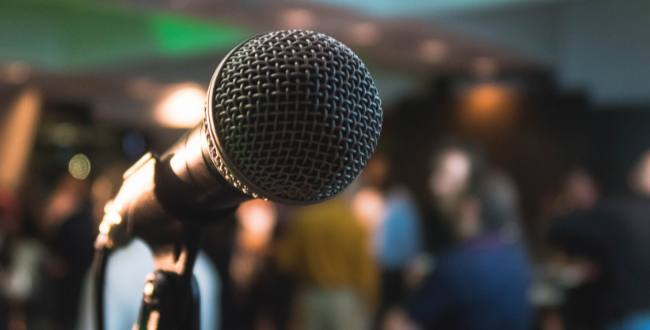 I recall back in 2018, I was working on re:Invent, which is AWS’ (Amazon Web Services) big annual conference in Las Vegas. I met one of our customers, an executive who was going to get on stage—let’s call him Gerald—at the Venetian Hotel. He was very chatty and confident as we walked to the main auditorium. We went through a door that was backstage and, as we walked through, I suddenly saw Gerald freeze. He was confronted backstage by eight massive screens, each four meters high, and an entire city of technical staff, people on videos, a green room, caterers—the whole bunch of commotion and planning that goes into creating a re:Invent presentation or keynote.

Now, re:Invent’s at one end of the spectrum in terms of the size and the scale. But it’s a good metaphor or image for the need to put some pre-thought and planning into how we’re going to tell a story that the audience then sees or experiences on the other side of the screen. So, let me give you a practical example of this, because Anecdote, as you know, we like to be very practical with how you can apply different concepts and tools.

Prior to Amazon, I was consulting to a financial services company on the West Coast, and my client was Head of Communications. Let’s call him Carmen. Carmen had just been briefed by the CEO on the need for a strategy launch event. They were launching their five-year strategy. As I came into the meeting room in San Francisco with Carmen, he printed out the proposed agenda, and it looked really, really bland. It was going to be a series of presentations on performance—the ones with numbers and charts and statistical breakdowns. Then with Carmen, he was going to be asked to prepare this launch video of a new strategy to get everyone excited. There’d be a Q&A, then a discussion on what it meant in execution. And in between, there would be a break. It would probably take two or three hours.

That was what Carmen was tasked with. But being creative, he knew that it was going to be a dead boring day for the organisation if they had to sit through that. He was concerned, because as Head of Comms, it fell on him to do something, even though the CEO was very much a numbers person and not that interesting. So sitting down with Carmen, we set about redesigning the event or the launch with two purposes in mind. One, we were going to tell a story, but also make it an experiential event. Because whenever you’re introducing a change or launching a new strategy, you don’t just want the rational sharing of information. You want people to actually feel it, and that begins with identifying what the big from-to shifts are going to be, both in terms of the business strategy or the change. In this case, it was a digital transformation. But also really think about, okay, the audience that we’re presenting to, if it’s an internal audience, what are the behavioral shifts that we’re asking them to make?

Again, in this case, they needed to be more collaborative, and they were given a lot more autonomy in dealing with their financial services customers. They were going to have to be a lot more proactive. We take those from-to shifts as being the basis for the story that we’re going to tell.

Of course, in order to have a good narrative, there needs to be characters. In this case, we developed the characters based on the audience. Carmen identified the main audience as being the SME team (small and medium-size enterprise team), the institutional team, and the commercial team. 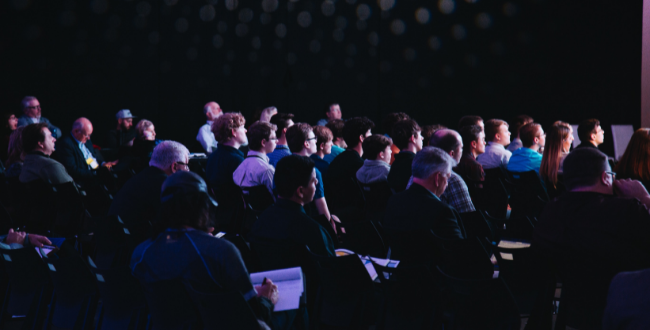 The first part of the event we designed was the baseline state, the from state. We had representatives from each of these teams, actual employees, showcasing all the great work that had been done and some of the issues that they were facing in these different areas. It was an immersive experience whereby people had a lot of interaction. They went around a world fair or carousel-type experience, and it wasn’t a boring presentation from the front of the room.

Then, the second part of the event was building urgency for change. If you think about the story, you’ve got your baseline, then you need urgency for change before you get to where you’re heading. How do we build the urgency for change? That was our challenge. In this part of the event and a story for that matter, you want to show all of the different challenges that are on the horizon, the opportunities that you might be able to take advantage of, and certainly events that have happened in the marketplace or internally that are creating this urgency for change. So in this case, all of the different activities that we planned were around creating the urgency. For example, we had demonstrations of new technology, and how it worked, and the impact that would have on customer service. We interviewed, on a panel, the executive team on what they were excited about, what their concerns were for the future. We had a simulation of a new customer group, because there was a new segment that they were starting to target, or that was becoming more important. We gave people an experience of that. We also created scenarios whereby competitors would do different activities, then people had to think how would they respond. This gave a feeling or an experience of the urgency or the need to act, and not just stay in that original state.

Then, it was at this point that the audience was ready for the launch video which Carmen had prepared and done in his usual masterful way, but they’d been primed beforehand. In the video itself, we used those same characters that we’d introduced before, but to show what they would be doing in the two states. So, what they would be doing in the future, because the digital transformation had a number of different elements. Rather than just conceptually sharing those, we actually produced a series of interactions of how they would be working differently or examples, so that people could see what the change would mean in practice. Of course, you want to make it as personal as possible. So tied to the video, we had a series of activities where people would break into their teams, and work out what the change meant for them, to come up with, what we now call, Anecdote Circles. But through Anecdote Circles, to extract little stories or little examples of how they would apply the change in their teams.

We also wanted to make an emotional connection through an experience. And one of the big changes that they had to make was to be more collaborative in the way they work with lots of different divisions and departments, which the digital transformation would help do. We brought in a jazz ensemble. This jazz ensemble all played their own instruments, but they came together playing one piece of music, essentially. So, it was a great metaphor and fun to reinforce the need to work together, and people were able to make their own connections of how it applied to the financial institution.

One important element of a story is not just to make everything rosy, but to address all of the conflicts or the challenges that may arise. We actually built into the event an opportunity for people to collect and express their concerns or their skepticism or their objections to parts of the strategy. We collected all of these up in different groups. And then in a parallel track, the leadership team was tasked with responding to or at least acknowledging how these different challenges would be addressed. It was in real time. They didn’t have all the answers on the day. But at least, all of these conflicts were aired, and people felt that they’d been heard.

Then finally, we ended off the event with calls to action of how is this going to link to what people are going to be doing in the future and in their teams. But also, we had a series of inspiring future examples. We brought back in the video a concept of what it would be like in the future, if people came along this digital transformation journey. That left people on a real high at the end of the day, which finished off over cocktails with the jazz band coming back. Carmen said that the CEO had come and chatted to him over the cocktails and just said what a brilliant event that had been. He’d normally downplay these events, and realised that the initial agenda would have been quite bland compared to the story that Carmen ended up telling.

So, I share that just to remind you to spend time, to put in all that effort behind the scenes. So that when your audience experiences an event, it’s a story, it’s something that they can feel, and that they’re moved by. So that they actually are called to action to change their behaviors, which is ultimately the goal of business storytelling.

Paul Ichilcik is a Principal at Anecdote. He is an expert facilitator and story consultant, having worked with C-level leaders across the globe to bring strategy and transformation efforts to life. Paul is a former management consultant and, prior to Anecdote, he worked in the US, in executive communications roles for Amazon, Microsoft and a San Francisco brand agency.