What happens after the bushfires?

With such devastation wreaked upon the lives of so many Australians in these horrendous bushfires, it’s hard to even think about how we will recover and reconstruct our communities. But one of the lessons that came from the Black Saturday fires in 2009 is worth having in mind early on, especially since the affected communities are right across Australia. That is, it is vital that our recovering communities are connected so they can learn from each other and build on each other’s efforts.

The importance of connecting across communities came late following the 2009 bushfires. Seventeen months into the recovery effort, the Victorian Bushfire Recovery and Reconstruction Authority (VBRRA) noticed that everyone was so busy getting their community in order that they had no idea what was happening elsewhere. As a result, they were reinventing ways to recover from first principles. Time was lost, and good ideas were not shared. And even if community leaders wanted to learn from their fellow compatriots across Victoria, they didn’t know anyone in these other communities to get the conversation started.

We were privy to these challenges because VBRRA invited us to help connect the fire-affected communities so they could share their experiences. On the 17thof July 2010, over 200 leaders from 33 Community Recovery Committees gathered for a two-day event to connect and learn from each other. 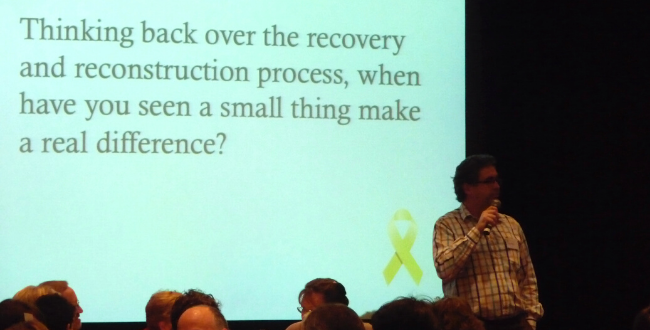 We started the day by encouraging everyone to share stories using this prompt: “Thinking back over the recovery and reconstruction process, when have you seen a small thing make a real difference?” Each person at each table shared a story, and then I asked everyone in the room to remember the person who told the story that had the most impact on them and to keep that to themselves.

After everyone at each table told their story, I asked them to move to another table and tell their story again. Once more, I asked them to think of all the stories they had heard and remember the person who told the story that had the most impact on them. We did this a third time, and then I asked everyone to stand and find that person they were remembering, put their hand on their shoulder, and keep it there. And because everyone was moving, it looked like a crazy conga line until it settled into a human map of the most powerful stories in the room with the most impactful story represented by the number of hands on the storyteller. 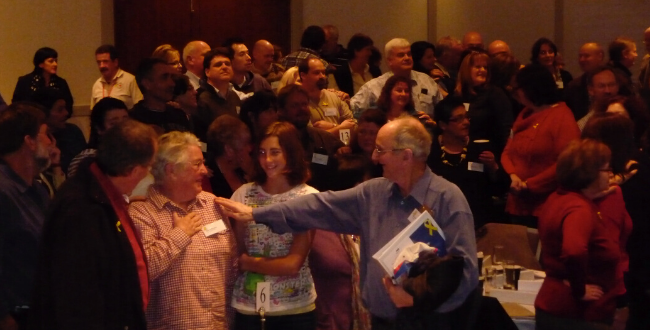 In a corporate setting, I would typically ask the people with the most hands on their shoulders to tell their story to the whole room. But the stories were too sensitive for that. Instead, each person wrote their story on a story card, noting the number of hands they had on their shoulders. We placed the cards on a large wall and clustered them into larger topics. 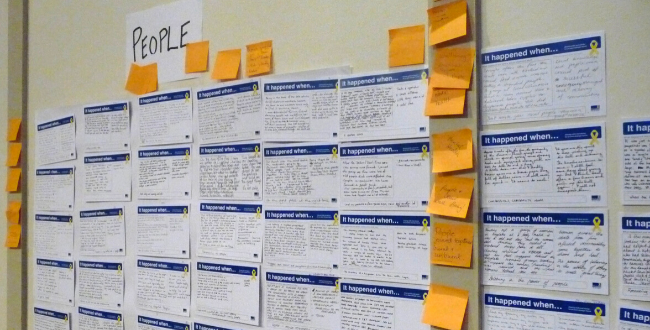 This process (which is called Jumpstart Storytelling) did three things: 1) people met their counterparts from other communities and quickly bonded based on shared experience; 2) in many cases, people shared their story for the first time which was cathartic; and 3) the room with filled with stories that acted as a springboard to remember and share other experiences and lessons learned.

As you can imagine, this process took several hours, but we had set the stage for further conversation and lesson sharing on day two. The CEO of VBRRA, Ben Hubbard, wrote to us soon after to share just how much the participants appreciated and enjoyed the experience. 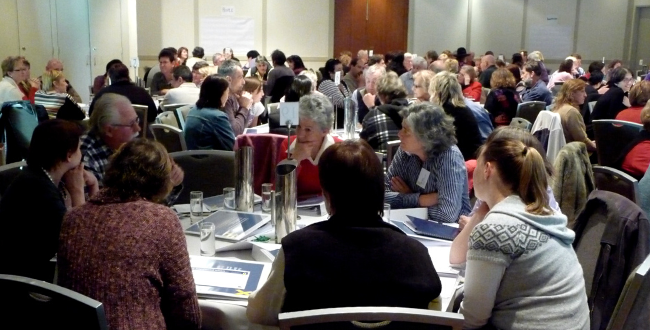 Presumably, there will be a recovery and reconstruction authority established for what is happening now. We will happily donate our time to run something similar if it makes sense to do so. Based on the VBRAA experience, I feel that it should be done earlier, say six months into the recovery.