Why you must complete that shitty first draft, and fast

In late 2014 I went to Dubai to run a three-day story session with 40 salespeople. Over the first two days we practised the core storytelling skills. The last day was devoted to what I call a pitch-off. I broke the salespeople up into six groups and asked each one to create its own version of the company’s brand story, then to pitch these stories to the other groups. The ultimate aim was to settle on a brand story the whole group could tell, each person bringing it to life with their own anecdotes.

I told the groups they each had 90 minutes to prepare for their pitch. Then I had some important advice to share. I told the groups not to chew up time by endlessly debating the first draft of their story, mulling over every part of it in a search for the perfect wording. This, I warned them, was pointless. I said the first draft of a story was inevitably shitty and they had to quickly get past it. They needed to start practising the telling of the story as soon as possible. This was what would ultimately give the story its shape. 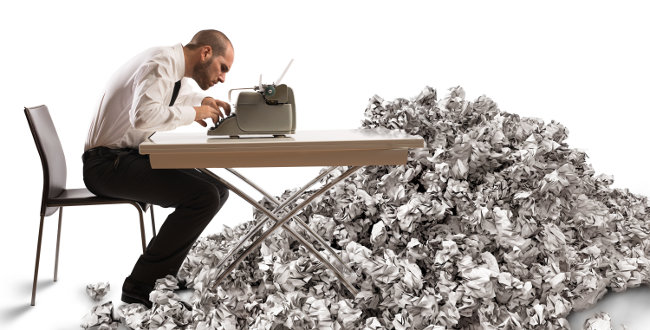 Well, I gave constant reminders of this as the clock ticked down. Thirty minutes in, I gave a time check and told everyone to practise, practise, practise. I did the same thing 45 minutes in, and 60 minutes in. But even so, with only 15 minutes of preparation remaining, only one group had made any progress with practising their story, and that was nowhere near a full run-through. The other groups were still arguing over wording, concepts and key points, trying to get it absolutely right before starting to practise it.

Unfortunately, I’ve seen this exact scenario repeat itself time and time again. Regardless of the amount of preparation allowed, people always end up hammering a story out at the last second. There’s a universal tendency to labour unnecessarily, and with high anxiety, over that first take, wasting valuable time and effort. The much more fruitful practising or redrafting stage becomes a mere afterthought.

My wife Sarah remembers attending a writing course a few years ago and experiencing first-hand this reluctance to acknowledge the first draft for what it is. The lecturer gave the class a topic and told them they had 10 minutes to write as much as possible on it, in the form of a story. Everyone wrote heaps. Then the lecturer repeated the exercise with another topic, except that this time the class had to hand in their writing. The lecturer said she would assess the submissions for soundness of grammar, character development and plot progression, among other things. When the 10 minutes were up, most people had hardly written a word.

In Anne Lamott’s 1994 work Bird by Bird, a wonderful book on writing and life, Lamott devotes a whole chapter to shitty first drafts, saying: ‘All good writers write them. This is how they end up with good second drafts and terrific third drafts’. Lamott goes on to describe what she calls ‘the fantasy of the uninitiated’, the whimsical notion that successful writers simply roll up their sleeves and churn out jewel-encrusted sentences for the enrichment of the reader at will. She adds: ‘Almost all good writing begins with terrible first efforts. You need to start somewhere. Start by getting something – anything – down on paper’.

At Anecdote, we agree wholeheartedly with Lamott. She may be talking about writing stories, but the same principles apply to oral stories. What goes for writers also goes for speakers.

Don’t kid yourself that the best way to a great story is to hold onto it until you think it’s perfect. You’ll only get bogged down in a futile attempt to produce a fully formed, unblemished story at your first attempt. What you need to do is get through that shitty first draft as quickly as possible, then iterate the story, watching it grow from its retelling. This is when you start making real progress. Your ideas coalesce through repetition – the hard work of practice – into something usable, which you then refine through further drafts into a compelling story with a clear business point.

Remember to jot down notes for your first draft rather than trying to write it out in full. And never share it – just get it out of the way and iterate. For example, if you’re pitching for business using storytelling, start practising the pitch very early in the process. Yes, the first time it’s pretty awful, but it then improves dramatically and rapidly. Don’t spend too much time worrying about getting the pitch right on paper. Focus much more on practising it. That’s where the real rewards lie.

2 Responses to “Why you must complete that shitty first draft, and fast”