When I did my first degree back in the early 1980s there were some big issues to focus on. One of them was ‘what will we do with all the leisure time society will have when computers are doing many of the jobs people currently do?’ Obviously, this issue was nothing to worry about!

But the second issue, strategic alignment (as we called it back then), has turned out to be something really worth worrying about – mainly because the advantages of achieving it are so big and because we are so bad at it. Research by Kaplan and Norton [2005] [1] showed that a staggering 95% of people in organisations are unaware of or don’t understand the strategy. A 2011 study of 450 companies found that that 80% of them felt their people did not understand their strategies very well. [2] Obviously, this is a big problem. 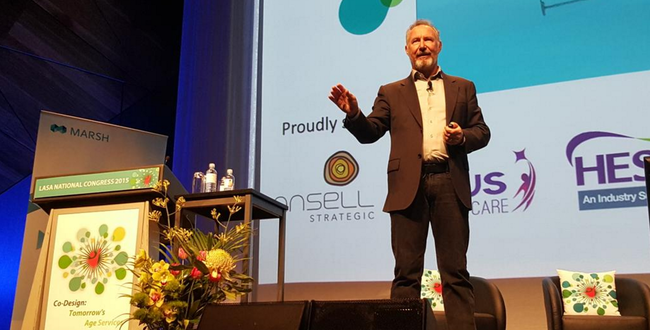 Getting leaders on the same page

Last Tuesday I gave a keynote at the 2015 National Congress for Aged Care on the topic ‘Giving strategy a soul’. After the presentation, numerous people came up and spoke to me about one of the challenges I spoke about: its not just getting staff at the coal face aligned to the strategy that’s difficult. Its also surprisingly difficult to get the senior executive team on the same page.

In the talk I shared two examples that demonstrated this:

In 2012, we were working with the leadership team of a well-known not-for-profit. The strategy had been set and we were there to help them convert it into a strategic story to communicate it to their staff and external stakeholders. There were 10 people in the room and Shawn asked everyone to write down the single most important thing the organisation needed to focus on. The result? You guessed it…10 different answers.

In March 2015 I was in the Philippines to take the leadership team of a global beverage company through the Storytelling for Leaders® program. The day before, they had determined their strategy for the next 12-18 months and part of the program was to help them turn the strategy into a strategic story. Before starting my session, they decided to spend 30 minutes recapping what they’d agreed the day before. I was an observer for this activity and what struck me was the many different opinions about what they had agreed and what they should now commit to. People were scrambling to grab the microphone to have their say and disagree with what others were proposing. I watched as a group of smart, committed people struggled to achieve any sort of agreement. Two hours later, the leader said ‘we’ve run out of time’ and handed the microphone to me.

Unless the senior executives are in agreement about the strategy – what it means, what is most important – it’s almost impossible to get strategic alignment at the coal face, regardless of how well you communicate your strategy. One thing that helps is the process of turning strategies into strategic stories. This process forces people to be concrete and specific and to explain the ‘why’ of your strategy, not just the ‘what’. This really helps executives get on the same page.

Judging from the response at Tuesday’s conference, getting strategic alignment across the executive team is a challenge for many organisations, regardless of the sector.

If you’re interested in a presentation on storytelling at an event or conference, check out the speaker profiles for Mark and Shawn

Comments Off on Giving strategy a soul with strategic stories