The art of business storytelling; it’s not a performance

There are 150 people seated in rows on hard, uncomfortable chairs. This is your division and it’s time for you to address them. You walk to the middle of the stage and welcome everyone, then thank them for all their recent hard work. Then you launch into a story. Your whole demeanour changes. You are clearly acting out the story. It’s more than miming – it’s a pantomime. People shift nervously in their seats. When the story finishes, you revert to your normal self. Everyone is wondering, ‘What in the hell just happened?’ 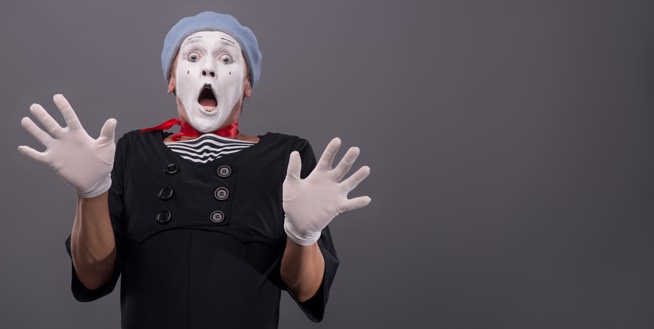 I’ve seen this happen, and it’s embarrassing. People often make the mistake of thinking that they need to dramatise their stories, to set them apart from how they deliver the rest of their presentation. Nothing could be further from the truth. Good storytelling is invisible.

The art of storytelling

The best communicators are conversational. They make you feel like you are being engaged in dialogue despite being just one face in a sea of faces. They move seamlessly from statements to stories, as you would in an informal chat. Unless you have been trained in business storytelling, these stories remain undetectable.

I didn’t appreciate just how hidden a good story is until an excited interjection in one of my recent training programs. I was talking about the importance of everyday stories, and how leaders can use them as analogies for what’s happening in the business, when Janet (not her real name) said she had an example to share. Janet works at a bank as a team leader. One day she had to inform her team of cutbacks their division was planning to make, which would put some initiatives on hold. When she finished her explanation, her team immediately objected and fired pointed questions at her. Janet felt she’d failed in her attempt at clear communication and getting the team onboard with the change.

A short while later, Janet attended a meeting where her boss had to deliver the same message to a larger group. The boss said, ‘Now everyone knows I’m renovating my kitchen at the moment. Well, this week my husband and I sat down with the builder’s quote for the work and we nearly fell off our chairs. It was over our budget, and I must admit I was disappointed. We’d put a lot of thought into our dream kitchen. But after the initial shock had worn off, we worked out what we might leave out. The two of us were happy with the way forward we’d come up with’. Then she shifted to what was happening at the bank: ‘Well, we have a similar situation here in the division. Our budget has been cut and we will have to make decisions to work out how we can still achieve our outcomes’. When she’d finished, everyone just nodded. There was a steely resolve in the room to deal with the situation. Janet couldn’t believe her eyes.

What’s interesting is that when Janet experienced what she felt was flawless communication, she was totally unaware that her boss had told a story. It was only in our storytelling workshop that the penny dropped. The above is an excellent example of the invisibility of good storytelling.

I’m often asked what’s the best way to tell a story. Some people want to know what gestures to use. Others are concerned that they talk in a monotone. I tell people that the key is to not overthink it. By simply including stories in what you are saying, rather than trying to make them stand out from what you are saying, you take care of both gestures and voice.

My starting point is to remind people that in business, it’s best to focus on the ‘small’ stories – the simple, real-life, everyday anecdotes that sit at the opposite end of the storytelling spectrum from the meticulously crafted ‘big’ stories of screenwriters and novelists. After they have found a story to tell, I say, ‘Now, when you share this story, imagine it actually happening’. When someone imagines a story happening as they tell it, they project the emotion contained in the story to their audience. It’s amazing to watch. People’s eyes begin to sparkle, their voice modulates, their gestures match the story – without giving any of these things a second thought. Of course, these emotions will only come through if your story has moments that your listeners can see in their mind’s eye – good stories to evoke emotions.

Remember, storytelling is not a performance. The best advice I can give is to act naturally and simply not try too hard.

The word ‘story’ is vexed in business. Imagine this scene. A senior leader stands in front of his people to give a presentation on the company’s direction, and says, ‘I would like to share a story with you’. If you were in that audience, what would you be thinking or feeling as he says that? When I pose this question to my workshop participants, they groan and wince. They say things like, ‘Here we go’ or ‘Don’t treat us like kids’ or ‘Just get to the point’ or ‘What trick is he trying to pull?’.

Now let’s imagine a similar scene, but this time the senior leader says, ‘Something important happened a couple of weeks ago that I’d like to share with you. It’s going to affect our business’. Hearing that, what would you be thinking now? Most people think, ‘Jeez, what happened?’ They want to know and they are ready to listen.

I tell leaders in our programs to avoid the ‘s-word’. Instead, talk about an experience, something that happened, or just jump right into the story with a time marker: ‘Three weeks ago, while I was at the Mildura plant …’ People love to hear stories. They just don’t like to be told they are listening to one.

Many businesspeople are falling in love with storytelling. And so they should. But let’s not make the rookie error of telling our audience we are telling them a story. It just puts people off.

If we remember that when we are sharing a story, we are not performing but rather simply illustrating a point, our business storytelling will improve no end. Let’s stay in conversation and keep our stories invisible.

Share5
Share
Pin
Email
Print
Tags: Communication
Comments Off on The art of business storytelling; it’s not a performance