076 – Dome making not an egg-xact science

Can you balance an egg on its pointy end? Listen to hear how Brunelleschi revolutionised how we think about innovation with one small egg demonstration. 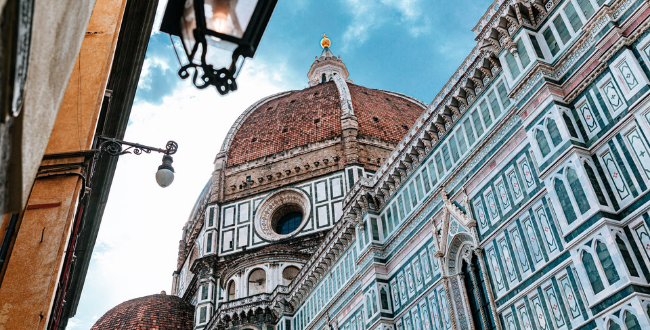 On this week’s episode of Anecdotally Speaking, Shawn shares a story he stumbled upon when visiting Italy a few years ago. Remember when we could travel?!

The story follows Filippo Brunelleschi, the founding father of Renaissance architecture, and his involvement in the Duomo Cathedral in Florence.

If you would like to read Brunelleschi’s Dome by Ross King, click here to find out more about the book.

As promised, here is Mark’s video where he attempts the egg-periment!

Shawn is co-hosting a new webinar that you might like to attend on how to bring face-to-face events online and ensure they’re engaging by using stories and techniques from TV production. Join us on 29 September to learn how to storify your events. You will receive a free 48-page eBook that describes the things you should consider. Click here to register.

In 1418, the Duomo Cathedral in Florence, Italy, had been undergoing construction for 100 years.

At that stage, they still hadn’t put on the dome. The designers had designed a dome so big that they could not work out how to build it on top of the cathedral.

To this day, it is still the largest dome in the word, sitting at 143 feet in diameter.

In order to come up with the best way to build the dome, they ran a competition and invited submissions from all across Europe.

The entrants arrived in Florence and laid out their models in the courtyard of the cathedral.

One of the entrants was the goldsmith and clockmaker, Filippo Brunelleschi.

Due to his diverse background, his design for the Dome had come from such a different perspective and was radically different compared to those of the other entrants. Primarily, most designs would have scaffolding in the middle of the dome to hold up the ceiling, but his did not.

Everyone was confused as to how was this going to work and how was he going to build such a design.

On the day that Filippo was shortlisted, he was asked to reveal how he would build the Dome in detail, but he was resistant. He was worried that the other competitors would steal his ideas and then he would have nothing.

Filippo decided to challenge his competitors by saying to the judges, “If my competitors can take an egg and balance it on its pointy end, on a flat piece of marble, they should win the competition.”

All his competitors tried and failed.

When it was Filippo’s turn, he turned the egg on its pointy end and crunched the end so it would sit flat. He let go and it stood straight and tall.

Filippo said to all his competitors, “Before I did this, you didn’t know what the answer was. Just like my plan—as soon as you see it, you will say it is obvious, but up until that point you have no idea how I am going to do it. That’s the innovation.”

Filippo successfully won the competition and spent 28 years working on the Dome.

During this time, he created new techniques for using scaffolding and cranes. He was always innovating.

Filippo was quite particular about safety, so created a platform in the Dome for all the workers. The platform held everything they needed during the day, including food, so they didn’t need to climb down as much.

Throughout those 28 years, there was only one death—a great feat for the 1400s given there were limited building and safety precautions.