These three storytelling myths could be limiting your business’ potential

An earlier version of this blog post was originally published by HRM as an article by Anecdote’s Managing Director, Mark Schenk. You’ll find it here. 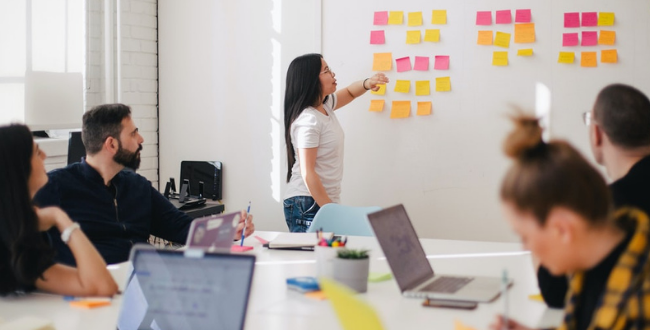 Last year, I attended an industry conference in the US where a number of the presentations were based on storytelling. It was disappointing that most of them positioned business storytelling as applying theatrical skills when speaking, providing advice like ‘don’t say you were sad, be sad’, and ‘unleash your inner thespian’. Other speakers talked about the beneficial effects of storytelling without actually telling any stories.

This has been happening for years, as more and more people jump on the storytelling bandwagon. The result of this, at best, is that businesses see storytelling as some kind of unattainable superpower. At worst, corporate storytelling is seen as a fad rather than as an effective and pragmatic communication tool.

This confusion is both disappointing and unnecessary.

Every human is a natural storyteller, we just don’t do it very well at work. One reason for this is because storytelling has been conditioned out of us by the time we leave school and assertions and statements have become our default communication approach.

Some of our greatest thinkers understood the effectiveness of conveying a message through a compelling story. Here is an extract from Abraham Lincoln musing on this topic:

“I believe I have the popular reputation of being a storyteller, but I do not deserve the name in its general sense, for it is not the story itself, but its purpose, or effect, that interests me. I often avoid a long and useless discussion by others or a laborious explanation on my own part by a short story that illustrates my point of view. So, too, the sharpness of a refusal or the edge of a rebuke may be blunted by an appropriate story, so as to save wounded feelings and yet serve the purpose. No, I am not simply a storyteller, but storytelling as an emollient saves me much friction and distress.” [1]

As noted by Lincoln, the purposeful use of story is an effective and practical tool for improving our business communication. Yet there are three beliefs that I think are severely limiting professionals today in their ability to use this tool.

Myth #1: Storytelling is an innate ability (a superpower)

We regularly hear people dismiss storytelling because they believe there are only a handful of lucky wordsmiths and raconteurs with this natural ‘gift of the gab’. This thinking is misguided. And research confirms why. In 1996 Robin Dunbar, published a paper titled Grooming, Gossip, and the Evolution of Language indicating that in informal situations, humans spend as much as 65 per cent of the time talking about ‘who did what to whom’. In other words, telling stories.

I recently worked with a group of researchers working in the field of convergent nano-bio science (I had to look it up too). At the start of the session, I understood little when they explained their research. By applying some simple narrative approaches and structures, within a few hours, they were able to explain their research clearly and impactfully.

One of the group members recently presented his research at a conference using these techniques and received the award for ‘best presentation’ as selected by the audience. He won this award despite having presented in English, which is very much his second language. This demonstrates that the use of story in a business context is accessible to all.

Myth #2 – Storytelling is only good for building rapport, by using our personal stories

Story is a powerful tool for building connection and rapport, no doubt about it. But this is simply the entry-level use of story for leaders—just the tip of the corporate storytelling iceberg. While research from the University of Wisconsin found the activity of storytelling had an impact on the participants’ interpersonal relationships, empathy, and sense of connectedness, it does so much more than that—as Lincoln pointed out.

A story is a powerful tool and, if you know how to use it, it can tackle many different business problems. You can use a story to change minds; communicate strategies, decisions, ideas, value, and changes; or use it to just make a point extra clear.

When I was last in New York, I ran a program with a group of senior vice-presidents from a global technology company. One of the group members said he was very busy and he felt he didn’t have time to use storytelling to communicate his messages. He said he just needed to tell people to do what he wanted. I shared with him an example I’d read recently:

A manager of a fast-food outlet noticed one of her new staff was standing idly, cloth in hand, during a busy period. Her normal approach would be simply to tell him to clean tables, but she realised there was high staff turnover, so maybe she needed to change. She tried something different.

She walked over to him and said, “Do you remember the mother and daughter at table five a few minutes ago?”

“How old do you think the daughter was?” she asked.

“Yes, that’s what I think as well. I don’t know if you noticed what happened when the mother went to the bathroom. The little girl got up on her chair and started licking the table. It’s so important we keep the tables clean.” The manager then walked off. She looked back and the young man was energetically cleaning tables.

I pointed out to the executive that the story approach might take a few seconds longer, but it has far more impact. Part of this is because stories convey emotion. As Canadian neurologist Donald Calne says, “The essential difference between emotion and reason is that emotion leads to action while reason leads to conclusions.”

Again, this view is very limiting. Stories should be viewed as facts, wrapped in context, delivered with emotion. Think of story as simply a more effective delivery mechanism for your messages—a ‘container for meaning’ that humans have evolved to respond to. Humans are wired for stories.

Internal stories can give a listener an impression of what life is like at a company, or a sense of the character of the senior team. This is why it’s important to craft both strategic and personal stories that can be conveyed for employees who work away from the office.

“Those that control the stories, control society,” wrote Plato. It’s just as true in business.

Humans are not rational machines, we’re emotional beings who want to connect with others. Stories allow us to do just that.