Storytelling with slides: meaning is inferred

I’m a big believer in simple, clear PowerPoint slides. If I’m going to talk about the 54% of people who have no idea about the company strategy, I’ll put up a slide with a big ‘54%’ in 155-point font on it, and only after I’ve spoken about it will I add any other text as a build. If I’m telling a story, I’ll often start with a picture, without a single line of text. 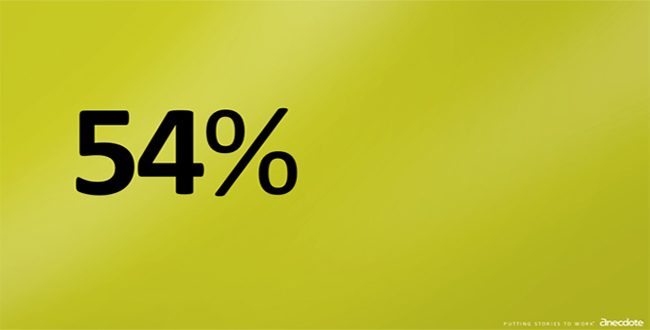 The slides should not compete with the presenter for the audience’s attention. Instead, they should help amplify the feeling you want to create. And most importantly, they should help you make a clear and compelling point.

Sometimes you want to create some intrigue with your slides. I remember presenting at the Singapore Institute of Management and putting up a slide that was covered in times – ‘1:23’, ‘4:45’, ‘7:20’, perhaps 50 of them. I asked the audience what they thought the times meant. Of course, they had no idea. Then I showed a picture of Singapore Prime Minister Lee Hsien Loong giving a national address, and I told my audience these were the points in the address when Prime Minister Lee told a story. It was a surprise, one that showed these leaders that their own leaders were storytellers.

But my clear and concise approach to slides has limitations, as I discovered last week when I participated in a leadership program for a global manufacturer.

Not So Simple Slides

The participants in the program had to present to their executives on what they had found in the research phase of a project. The execs were shown slides jam-packed with information – lots of bullet points, graphs, text you couldn’t read, and material the presenters didn’t refer to. In my mind, it was a mess.

Yet the executives gave encouraging feedback, and a couple of times the presenters were congratulated on their analysis. It was if the slides conveyed a busy analytical effort in a way that the words spoken did not.

This got me thinking. If you have a company culture that values analysis and analytical thinking, you had better include in your slide deck some graphs and analytical indicators such as statistical language. And then to make it stick, make sure you tell the story of the data.

Data storytelling is taking off, though the efforts are mostly misguided, relying on high-end graphics. As a reader of this blog, you know that you won’t get the benefit of storytelling unless you are actually telling a story. I’ve written a paper on data storytelling you might like to take a look at, but in short, there are at least four data storytelling strategies you can use.

First, there is the obvious story that emerges from a time series, where the trend was heading one way and then something happened and it went another way. That’s a story. You just need to tell it as a story, which sometimes doesn’t occur to people in business at first because they have been trained in corporate language. To tell this as a story, you need to go through what happened sequentially rather than summarising and abstracting.

The second strategy is to tell the story of cause and effect that explains a data pattern. The example I use in my paper is the map of cholera deaths John Snow made in Victorian England. There is a pattern in the data. What is the story that explains it?

The third strategy is useful when the data analysis involves neither a time series nor an interesting pattern but rather an insight, such as the importance of psychological safety in team formation. In this case, an interesting and useful story could focus on just how the researchers discovered the insight.

The last strategy I covered in the paper (btw, I think there are many more) involves doing something remarkable to create a story so that people understand an insight. Professor Barry Marshall took this approach when he couldn’t get people to believe his data that showed ulcers were caused by bacteria. To trigger a new story, he drank a concoction of bacteria and gave himself ulcers. and then drank an elixir of antibiotics to cure himself. The press got hold of the story and it went viral. Marshall ended up winning a Nobel prize for this work.

And if your audience values analytics, by all means include them, but never fall for the totally untrue belief that people are not swayed by emotion. You can read about the research in my book Putting Stories to Work if you want to see evidence that we are all affected by emotion, including engineers, scientists, lawyers, business number-crunchers, accountants, and economists. Just don’t make it tear-jerking emotion. Use emotions with numbers.

Comments Off on Storytelling with slides: meaning is inferred