Finding stories to tell is only part of your challenge as an effective communicator. It’s just as important to discern the story’s meaning so that you can put it to an appropriate use at the right time in the workplace.

Once you find – or experience – a story, think about what scenarios you could apply the story and what insights the story offers. Don’t limit yourself to a single meaning per story. In fact, the same story can be used in various circumstances to make different points.

To highlight this, I offer one story in three parts, along with the insights I gained from each part. My list is nowhere near exhaustive, and I invite you to use the comments section to add your own insights.

Also note that the three-part story demonstrates that the same story can be rearranged, or shortened, or the emphasis can be shifted depending on the point you are making. In this case, I’m sharing the story in chronological order and marking three distinct stopping points that delineate three versions of the story.

On a recent Saturday morning at the local grower’s market, I stopped by the stand of my favorite farmer. As I was selecting my weekly produce, he was busy restocking the zucchini bin. He disappeared for a moment, then returned with a very large zucchini from his truck and said he thought I might like it for baking. It was like he had read my mind. I snatched up that oversized treasure as images of chocolate zucchini bread danced in my head.

When I was ready to check out, I asked how much the big zucchini was, and the farmer pointed to the sign on the bin that read: $0.50 each / 3 for $1.25. I laughed and said that surely this zucchini that was four times bigger than the rest should have a higher price.

The farmer maintained that the price was the same, regardless of the size of the item, but I insisted that I pay him more for it. I rounded my $12.75 bill up to $15, and felt very good about my purchase as I told the farmer with a laugh, “You drive a hard bargain.”

This story could be used to make a point about:

The first part of the story stands on its own, but it doesn’t end here.

A few days later, while speaking to some relatives who are avid gardeners, I proudly told them about the deal I got on the giant zucchini. The amateur farmer laughed and told me that the big ones are no good. His wife jumped into the conversation and said, “When he comes across those giant zucchinis in the garden, he doesn’t even bring them into the house; he just chucks them into the woods.” Suddenly the zucchini bread I was craving didn’t sound so good and I felt like maybe I had been tricked by the friendly farmer.

This part of the story could be used to make a point about:

The story doesn’t quite end there, either.

The finale actually came the following morning when I arose early to see for myself how the two-foot long zucchini would work in my recipe. Once I finished shredding and baking it into three loaves of double chocolate zucchini bread, everyone who tried it agreed that the bread was delicious. I was a little smug, but also happy that I didn’t launch the zucchini into the woods before trying to bake with it.

I’ve told this story a few times to friends, but I’m itching to use it in a business setting.

A simple story matrix like this will help make sure that I remember the story variations and use the proper one when the time arrives. 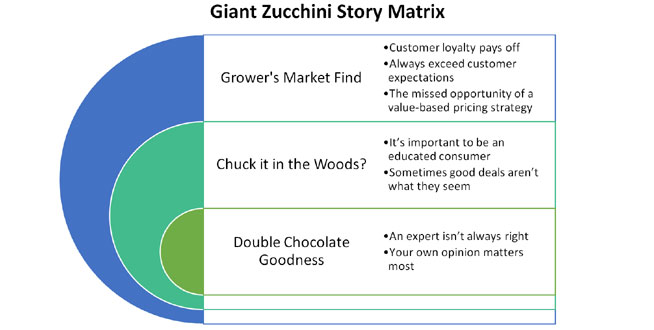 What other insights can be gained for this story? In what scenario would you use this story? Share your thoughts in the comments.

Amanda Marko, President and Chief Connection Officer of Connected Strategy Group, is Anecdote’s partner in the United States. Storytelling complements her work to help leaders increase their influence through deeper connections that enhance the effectiveness of business strategy, change management, employee engagement, and corporate culture initiatives. Connect with Amanda on: