For those at the top, fostering engagement is a daily routine

The benefits of employee engagement

It has been proven that employee engagement is strongly linked to overall company performance.

Good engagement, on the other hand, leads to high staff retention and attendance rates, and to the achievement of identified goals.

The benefits of employee engagement may be clear-cut, but many executives and HR teams struggle to foster it. To them, engagement is simply too abstract a concept to act on.

However, for others, such as the people at Central Restaurant in Lima, Peru, and at Disney World in Orlando, Florida, both of which I recently visited, fostering engagement is something that comes naturally. 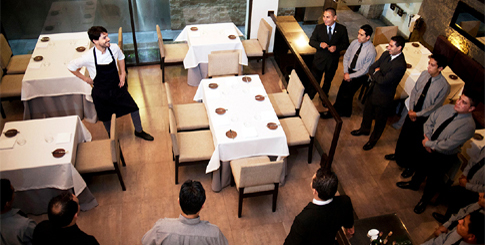 Central Restaurant, which was recently rated the world’s 15th best eatery by an academy of culinary experts, was founded by its head chef and director, Virgilio Martinez.

It was established after a crusade by Virgilio to recover ancient, forgotten Peruvian spices, produce and recipes, which are now prepared by his cooking team in a contemporary fashion.

In March, I had the opportunity to dine at Central Restaurant with my wife, Viviana. It was an amazing experience. We arrived ten minutes before our reservation, which was for 7.45 p.m.

The restaurant was not yet open, but there was already a bunch of people outside waiting in line. I heard a Peruvian man say to some French visitors: ‘Virgilio is a genius. You’re going to be blown away’.

Five minutes before our reservation time, I heard some noises coming from inside the restaurant. I peeped through a window and saw a woman speaking to the Central team. She seemed energised, and so did the rest of the crew.

There was laughter and clapping, and each employee said a few words to their colleagues. Finally, they all shouted something in unison and went to their positions.

We were let in at 7.45 p.m. sharp. Everything had been taken care of: the tables, the view, the lighting – all of it was perfect. And, of course, so were the 17 dishes from the degustation menu that were suggested to us.

After the meal, I spoke to one of the four waiters who had taken care of us. I told him that I’d noticed the staff had had some sort of session before opening. I asked if something special was happening that day in the restaurant.

He said: ‘Oh, we do that thing twice a day, before lunch and before dinner. All the crew meet and there is someone who leads a 15-minute reunion. We talk about each of the patrons; for example, we not only know your names, but all of us know that you’re on your honeymoon and that you are from Mexico. Also, we have a short game or story-sharing time to energise us’.

I asked the waiter if Virgilio ever attended these sessions.

‘Of course’, he replied. ‘He spends 90% of his time in the restaurant, and when he is here he actively participates in the meetings’.

Before leaving Central Restaurant, I told my wife: ‘I want to live here. This is like a perfect community. Everyone seems lively and fulfilled’.

After visiting Lima, Viviana and I flew to Orlando. We joked that having seen Pachacutec’s resort at Machu Picchu, we were now going to see Mickey Mouse’s resort.

Our first contact with a Disney World employee came before we’d even entered the park. Bob, a senior staff member, greeted us near the Magic Kingdom entrance and asked us where we were from. Then he gave us some neat suggestions: ‘If this is your first time at Disney World, get some “First Visitor” badges. Also, don’t forget to attend the parades: they’re pretty cool’.

During our visit, we noticed that nearly every one of the staff throughout Disney World were having a great time. Curious about this, I later called a cousin who had once worked in a restaurant in the Magic Kingdom. I asked her how the Disney company fostered the high spirits that we’d seen at the park.

She told me: ‘There was a daily activity called “Line-up” where our manager showed us customer satisfaction surveys from the day before, gave us a heads-up about daily projections, and asked us to share magical moments’.

After what I’d seen at Disney World, this didn’t surprise me. Rather, it reinforced my experience at Central Restaurant: for those at the top, fostering engagement is a daily routine.

Andrés helps Mexican executives build storytelling habits and wants to spread the word about the power of stories throughout Latin America.

Comments Off on For those at the top, fostering engagement is a daily routine