The link between memory and stories

The link between memory and stories is tightly woven. You can’t understand story without understanding memory. Our evolution has gifted us with some interesting memory quirks including our natural urge to preference a complete story over one where essential parts are missing.

I’ve felt this effect keenly on my first visit to Washington DC. I was staying at the Willard Hotel (IHG is a customer), a grand and historic place at the top of Pennsylvania Avenue two blocks east of the White House, and met story expert and tour guide trainer, Paul Costello. Paul was taking me on a tour of the monuments of the National Mall but we started in the lobby of the Willard.

“Back in the 1870s the White House wasn’t the most comfortable place to relax as the President,” Paul begins. “Ulysses S. Grant would often unwind with a whiskey and cigar in the lobby of the hotel. Word got around that the President could be found in the hotel foyer so people would arrive seeking favours or just to get the ear of the President. After a time these people became known as lobbyists.” Wow, I thought, what a great way for that word to come about. Then Paul said, “but it’s just a myth. The term was coined from the gathering of Members and peers in the lobbies of the UK House of Parliament.”

It was such a good story. I could picture President Grant with his hand around a cut glass whisky tumbler, smoke billowing from his cigar in one of the far corners of the lobby with a gaggle of people around. I had to fight hard to include in my telling that this story is a myth.

When good stories get in the way of fact

Researchers at Western Australia have shown that when a good story is told but then it is revealed as misinformation it’s hard for our memories to let it go. Providing a retraction by just detailing the facts has little affect in correcting the misinformation. In workplaces, however, this “let’s just get the facts out,” is the default response. The best remedy is to tell a better, more plausible story, but even this doesn’t eliminate the original information. It seems that in addition to Annette Simmons’ aphorism ‘the best story wins‘, ideally it is the first story.1

The stickiness of a good story that gets out there first gives us a good insight into how our memory works. In 1949 Canadian psychologist Donald Hebb postulated that memories are created from the simultaneous firing of cells between neurons. Over time his hypothesis was short-handed to the catchy phrase, “cells that fire together, wire together.” Ever since, scientists have been trying to confirm or debunk his hypothesis. It turns out to be a very difficult thing to observe and test. But in 2014 scientists at the University of California discovered compelling evidence supporting Hebb’s theory which they published in Nature in support of Hebb’s theory.2

The flip side to remembering is forgetting and as far back as the 1879 German psychologist Hermann Ebbinghaus did experiments on himself to work out how quickly we forget and what we can do to slow the process. His method sounds like torture. He would learn a set of nonsense one-syllable words such as YAT, BOK and PUZ and say them aloud and then later see how many he could recall. A single experiment could involve 15,000 recitations.3 His research resulted in the forgetting curve which shows how quickly we start forgetting things. As quickly as 20 minutes and we’ve lost 40% of what we just learned. In 1 day we lose 70%. The good news is that the curve starts to flatten out leaving us with vestiges of memory for a decade or more. But not all memories are created equal. Some will last longer and we can do things to help these memories to stick. 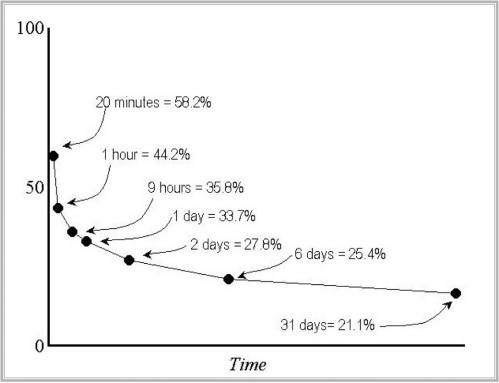 There is not much we can do with the passing of time but forgetting also depends on many other factors including the original impact of what we’ve learned.

We remember things that create an emotion. That is, we remember what we feel. Have you ever been told by your boss that you won’t get that promotion you were certain you were going to get? Was it a punch to the gut? Can you remember where you were when you were told the news? Can you remember what was said and how he made you feel? Think of another emotional moment. How well can you recall it? The more emotional the event the more we can remember. But we don’t want to remember all the high emotion events. What about the day to day experiences and lessons?

The interesting and the extraordinary

Memory champion, Ed Cooke, says that we remember things that are interesting to us, especially things that are out of the ordinary. Say we are walking through a busy street in downtown New York. There are lots of business people dressed in business suits and shiny shoes. You see this everyday so you don’t remember any of it except for one businessman who is walking a duck on a lead. It’s funny, it’s unusual, and you remember it. OK, that example is at the extreme end of unusual. What else would be interesting and memorable on our walk downtown? What if we saw a woman slapping a man on the subway. How about we saw a child fall over and graze her knee? Or perhaps you notice no one is wearing a business suit today (and it’s not casual Friday). We notice things when something unanticipated happens. And in each case there is a good chance we will tell someone what we saw. We will tell them a story.

Could you picture each of the scenarios I just mentioned: the businessman and the duck, the slap, the grazed knee? We have an incredible memory for images. In the 1970s a Canadian psychologist, Lionel Standing, conducted a fascinating experiment.4 The subjects were shown 10,000 images over a few days and then after a two-day rest he tested their ability to recall what they saw. The images were fairly boring snaps of dogs, cars and people, nothing really out of the ordinary. During the recall the subjects were shown two images side-by-side. One was from the set they recently learned and the other was a picture they had never seen. The subjects just needed to indicate which image they’ve seen before. For 10,000 images they correctly recalled 66%. Two out of three is not bad. That’s 6,600 they got right.

A smaller set of especially vivid images were also tested. So rather than just showing a picture of a dog a vivid image would show a dog with a pipe in its mouth. When the researcher showed 1,000 vivid images the subjects recalled 88%. We remember what we can easily visualise. It’s one of the reason why a businessman walking a duck on a lead is more memorable than the less visual version which might be a man who takes his bird for a walk.

Your memory and the power of stories

What do we know that conveys emotion, and helps us picture what’s happening? Yes, a story of course. The features of a story help us remember much more than just facts alone. Our brains seem wired for story structure. But let’s not get too hyped up about our ability to recall information shared as stories. There is a meme on the internet (and has even been published) that information conveyed as stories is 22 times more memorable than facts alone. I must admit I even perpetuated the myth on this blog a couple of years ago. But when I went searching for actual experiments I couldn’t find a single verified research study to back this rather spectacular claim. Mind you this is what I found, which is still pretty impressive.

In 1969 two Stanford professors, Gordon Bower and Michal Clark, set out to test the memorability of words embedded in stories versus a random list of words. Students were asked to memorise and recall 10 sets of unrelated words. The control group remembered the words in any order they wanted. For the story condition the students constructed a story that contained all the words, one story per set. When asked to recall the words the students that constructed stories were able to remember six to seven times as many words compared to the random set.5

Six to seven times better is a massive improvement. Imagine if we could run the 100 metre sprint six to seven times faster or make a business decision six to seven times faster. I think we would be pretty happy with ourselves. While this study looks at how to remember lists, which is exactly how memory champions do it by constructing a story (the world record for time it takes to remember a pack of 52 playing cards is now 22 seconds using this technique). How more memorable is a story than say a passage from an encyclopaedia?

In 1980 three researchers from University of California compared the memorability of narrative texts (such as the story of Noah’s ark) and expository texts (such as an encyclopaedia entry for armadillos). 12 texts were rated by the college students for their narrativity, familiarity, and interestingness. The narrative texts were read about twice as fast as the expository texts6 yet the narrative texts were remembered twice as well as the encyclopaedic texts.7 There was a high correlation between narrativity and the amount of information recalled (0.92) yet familiarity and interestingness had a very small effect on both reading time and amount recalled.

My search is just beginning because I feel certain there are other research results that illustrate the impact of stories. Interestingly when I read through some of the obvious places to look such as Story Proof by Kendall Haven, the claims are typically by academic theorists and are not backed up by experimental proofs. At least for what I could find on memory.

Please let me know of other good experiments you know of that show how story affects memory and vice versa.

Want to improve your story skills? Check out our online training program, 7 Tips to be a Better Business Storyteller. Only $49.