Getting personal about your presentations

When preparing presentations or keynote speeches, leaders often shy away from using a personal story. It’s much easier to share a new direction or demand action by focusing on the rational reasons or tasks to be completed. However, as humans, we relate more closely to people than to concepts. So, before people will follow your ideas they want to know what they mean to you as a leader, why you personally care. Unfortunately, presentations rarely contain this personal element and therefore fail to connect. For example, there’s little value in just asserting, “People are our most important asset,”—rather, give the audience a specific story showing why you personally hold that belief. 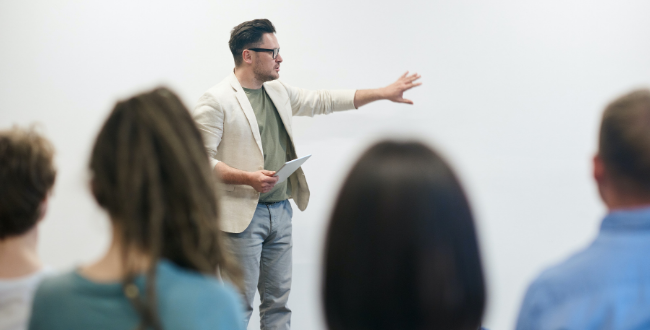 In some cultures there may be discomfort getting personal in a presentation, while others may use the stage as a license to overshare! There’s a balance of course, so let’s ease into this; you can start by sharing someone else’s story in your presentation but one that you personally relate to. Then, the next level may be sharing your own story but one that occurred in a professional context. Finally, you may be more vulnerable and share a story from your personal life, then link it back to your professional point. Each of these personal stories has the capacity to turn a sceptical audience into a welcoming one.

At the first level, take the case of our recent executive client who wanted to show his commitment to the pursuit of ‘continuous improvement’. Simply stating this with a list of reasons would have been rather uninspiring. Instead, we looked for a relevant story, with a personal connection. It came in the form of his association with the Airforce.

The story involved a pilot whose F-16 plane was shot down in 2018. Within days, the Airforce Chief convened an open debrief. Within a week, the Chief shared the findings publicly—the pilot had hovered too low, for too long. Within a fortnight, the Chief himself got into the cockpit alongside the downed pilot for their first flight back. The executive then explained why this example was meaningful to him and how he’d ‘fly alongside’ his team if they were prepared to openly learn from mistakes and improve. Suddenly ‘continuous improvement’ had credibility.

As I’ve said, the next level is to share a story that happened to you personally but in a business context. This is a natural way to sound more authentic and avoid corporate speak. In 2018, I was preparing an executive speaker for an Amazon Summit in Atlanta, in front of 5,000 people. He rehearsed his presentation on how the IT Group made improvements working with AWS. While technically accurate, his presentation lacked conviction. So, I asked him to give a specific example of where he had improved in something that he was personally passionate about. Without missing a beat he replied, “Craft brewing.” He proceeded to enthusiastically recount his first exposure to the brewing process and how he’d become better over time.

I then asked him to find specific examples where he personally had overseen improvements in the IT Group. To be fair, it took a little more effort than the brewing case but he came up with two or three specific stories. As he started to explain the details of what had occurred and his role, you could see his eyes light up. We worked these stories into his keynote to preface each technical improvement and the presentation became a lot more engaging.

Ok, are you ready to get personal? A truly personal story that highlights a leader’s motivation can be very powerful. The one caveat is it needs to be highly relevant to the point you are making. Earlier this year, we sought a way for a CEO to show she was committed to her educational institution and considered it like a family. Again, just stating these words out loud would have been dull. Instead, she shared a personal anecdote in her annual AGM keynote.

At the time when she was deciding whether to take on the CEO role, her husband was very ill. She’d been highly reluctant to sign but her husband, an educator himself, urged her to take the role to pursue their joint passion for education. Six months after taking the role, he sadly passed away. To her surprise, students turned up in their hundreds to visit her home for a series of ‘wakes’ in order to offer their condolences. She was visibly moved in the speech and, after hearing the story, no-one doubted her commitment or sincerity to grow a family culture.

So here’s the challenge: when preparing your next speech or presentation, try exploring one of these story-based approaches and be prepared to get personal!

This blog post builds on a section of our definitive guide to corporate storytelling, Corporate Storytelling—The Essential Guide. You can find it here (and download a convenient PDF).