Storytelling in business and the effectiveness of ‘pizza’ meetings

My involvement with storytelling in business started back in 1998, when I joined the UK Audit Commission as a researcher. At that time, the Audit Commission was the public sector watchdog in the UK. It was well known for its hard-hitting and evidence-based research reports, which exposed poor performance, fraud and waste in the public sector, and made recommendations for improving public services. 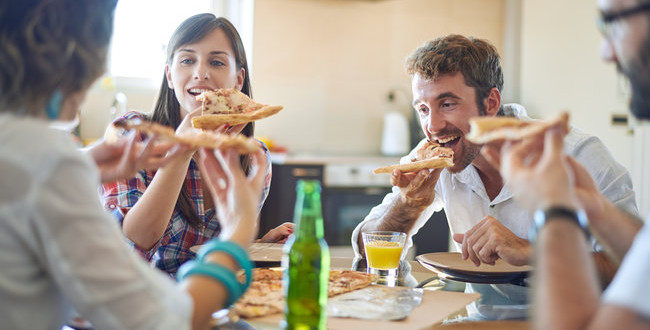 My boss at the time was the grandly titled ‘Controller of Audit’, Sir Andrew Foster. Despite looking like your favourite uncle at a wedding (he sported a natty moustache, rosy pink cheeks and a constant small smile), Andrew was a consummate networker: he lunched with politicians, journalists and movers and shakers. As a result of his networking skills, the Audit Commission had grown in influence during his time at the top.

Once a month, Sir Andrew would run a ‘lunchtime pizza briefing’. These briefings were open to all staff in the Commission, no matter what job they performed – receptionist, executive director or print room operator: everyone came.

A tower of pizza boxes would be delivered by the local pizza company, and taken to the staff room in the basement of our headquarters. Gradually the smell of pizza would rise up the stairwell of the building, and my colleagues would begin to appear in the staffroom and load their plates up with pizza slices, well before the official start time of the briefing.
During his 40 minute briefing, Sir Andrew would take us through his diary for the previous month, and share with us confidential nuggets of information from the different meetings he had attended. We would hear about the new policy that a government minister had not yet made public. We’d get the real reason why a council chief executive had resigned, not the official reason reported in the press. And Sir Andrew would give us a ‘heads up’ about the contents of the reports that the Commission was going to publish in the coming months.

Instead of statistics and bullet points, Sir Andrew would share one or two powerful examples of the waste that we had found, or the innovative services that we had discovered in leading councils and hospitals.
Sir Andrew was a great communicator. Staff who attended his briefings felt ‘let in’ to his thinking, and his knowledge. And we never felt surprised or wrong-footed when the Commission’s reports were published. Instead we felt ‘ahead of the game’.

Fast forward to 2009, and I am sitting in a training room in London, listening to Shawn Callahan of Anecdote explain what business stories are. He tells the participants that stories are not grand narratives, complex plots or ‘Hero’s journeys’. Business stories are just real-life examples of something you have seen, or heard or witnessed. They are an experience that you have had, re-told for a purpose.
That’s when the penny dropped for me, and I realised that what had made Sir Andrew such a great communicator was that he told stories: he shared real-life experiences of his own. And even when he shared experiences that weren’t his – like the examples from our reports – they were still in the form of a story.
Realising that the best stories are just everyday anecdotes was a real turning point for me. It helped me realise that storytelling really is a skill that we all have already: it’s one we can get better at with practice, and we can learn how to put our stories to work.

Back to the future

Today, I am one of Anecdote’s Global Partners, running Storytelling for Leaders programmes of my own. And I run my own organisation change consultancy, based in the UK, using stories and narrative techniques. I work with leaders whose organisations are changing, where human beings are involved in the change.
When I’m not consulting, I play bridge and board games (often with my two boys aged 13 and 11), walk in the countryside, and have recently returned to a childhood hobby: I perform magic tricks with playing cards. But that’s another story…

Interested in improving your storytelling in business situations? Storytelling for Leaders is a six-month training program comprising a one-day workshop and a deliberate practice program – Learn more about it here

Stuart helps leaders to navigate change in their organisations more confidently and more skilfully. He knows first-hand the power that stories have to guide change.