When it comes to communicating strategy, leaders are the channel

About 10 years ago, we started working with organisations to convert their strategies into strategy stories. It was clear right from the start that creating a compelling story was only one of the conditions for success.

The other non-negotiable was that leaders had to have the skills and confidence to tell their version of the strategy story confidently and authentically, to different audiences and in different contexts. 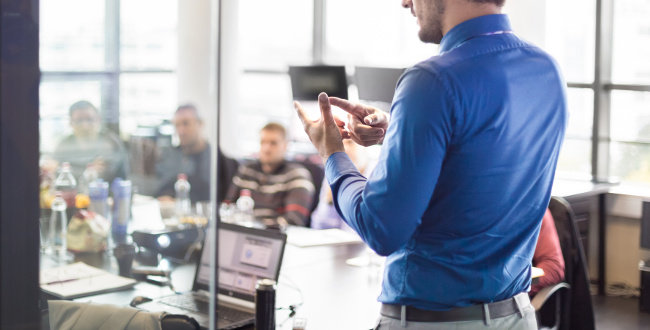 This might sound obvious, but in fact it challenged the norm at most organisations. That’s because what usually happened was that once a strategy was developed, the internal communications team – not the company’s leaders – were given the task of communicating strategy to the rest of the organisation.

This was a practice we had to work hard to overturn, but the results were well worth the effort.

Tried but not so true

Back in 2012 I was working with the Department of Human Services in Canberra to both develop their service delivery strategy story and teach the individuals in the leadership group how to tell the story from their own perspectives. To do this successfully, we would need to get the internal communications people on board, and also address the scepticism of some of the department’s leaders.
To begin with, internal comms were not happy about the project. They saw strategy communication as their responsibility, and theirs alone. Indeed, they felt their existing methods were so tried and true that when we met with them to talk about our strategy story approach, they mainly wanted to know which communication channels we were going to use.
Did we have a video in mind, or were we leaning towards brochures, a roadshow or an intranet display? Needless to say, they were very surprised when I responded: ‘When it comes to strategy, leaders are the channel’.
The internal comms team initially argued against this position. It was, after all, quite a departure from the way they’d been used to working for a long time. The emphasis would shift from presentations of their own design to the collective oral storytelling of the leadership group. But after only a few minutes of conversation, they started to get it – the seeds of understanding had been sown.

Later on, we held a session in Melbourne to begin teaching the department’s leaders how to tell the strategy story. I remember one of the senior executives sitting for the first hour or so with his arms firmly crossed and a big scowl on his face, clearly doubtful of the merits of the approach
Then we got to the part of the process where the leaders paired up and were given five minutes to tell their own version of the story to their partners. At the end of this activity, when I asked the participants for their thoughts, the scowling executive stood up immediately. But rather than express any disapproval, he said this:
‘I get it. What normally happens is that internal comms put together a slide deck and I get a directive to gather my staff and take them through the deck to explain the strategy. It feels totally unnatural … inauthentic. What you’re saying with this story approach is that I get to talk to my staff about the strategy in my own words. This is fantastic. I’ll no longer feel like a fraud standing in front of my staff talking to somebody else’s slide deck.’

We’ve learned a lot about communicating strategy over the years. One of the most rewarding things has been seeing sceptical leaders reluctantly go through the strategy story process and then have a ‘Hallelujah’ moment.
This is the instant when they realise that having the skills to tell a strategy story confidently and authentically is both rewarding and liberating. After all, when it comes to strategy, leaders are the channel.
At Anecdote, we have a well defined process to make your strategy stick, learn more about it here

Comments Off on When it comes to communicating strategy, leaders are the channel