By Amanda Marko, an Anecdote Partner based in the USA

On the main convention floor of Madison Square Garden in New York City, thousands of screaming party loyalists had temporarily replaced thousands of screaming Knicks fans for a week in late August 2004. Behind an unmarked door off the main floor, the volume was more subdued as the rock stars of the Republican party relaxed before re-entering the hectic arena.

It was here in the Senate cloakroom that I had the chance to meet Bono for the third or fourth time and deliver a personal message. The photograph captures me thanking a real rock star for calling my boss, U.S. Senator Mike DeWine “the body guard of the world’s poor,” for his work on funding global AIDS prevention. It was a headline-making quote that was heard round the world and I appreciated the U2 front man for the publicity coup.

That moment was made possible by a clarity story. 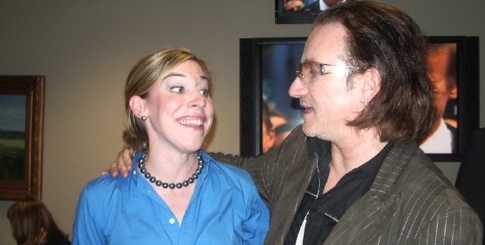 Clarity stories tell the why. They explain the backstory and provide context for decisions and actions. Organizations that are grounded by sound purpose and guided by a strong strategy typically use clarity stories.

Working as head of press operations for a US Senator

My first job out of university spoiled me in many ways. As the head of press operations for a United States Senator, I had a front row seat to history, met celebrities and power players, and did important work. But the experience of working for an organization with a clearly defined purpose and strategy shaped me the most.

Political office holders are elected on legislative platforms that are thoroughly and publicly vetted. The leader’s purpose is often closely tied to her personal priorities and the demographics of the electorate she represents. As a result of the election process, her views are defined and recorded, and her decision-making ability is judged against past positions.

Upon election, Members of Congress have definite mandates and are usually staffed by professionals who are personally devoted and uniformly united behind the Member’s purpose and strategy. In my experience, not only did we believe in the causes on a deep level, we also each understood our roles in advancing the legislative agenda and securing the Senator’s re-election. I was lucky to work with a strong leader; it made my job much easier because when an issue was raised, it was usually fairly obvious if my boss would champion it himself.

While the Senator’s strategy evolved over his years in office, it always stayed on track because it remained true to his nature. An evolution of sorts occurred around 2002. His many years of work for Haiti – often behind the scenes – took on a new dimension because related issues captured global attention. When funding to President Bush’s global AIDS Millennium Challenge risked being reduced, Senator DeWine reinstated it and was praised by Bono. Likewise, when the conflict in the Darfur region of Sudan escalated, Senator DeWine drew attention to it in the Washington Post. My boss was a natural leader on both issues because of his personal and Congressional advocacy on behalf of Haiti, where the AIDS and poverty rates are on par with sub-Sahara Africa. When these new crises arose, neither the Senator nor his staff needed convincing; it was clear that he had a leadership role to play.

Decision-making, strategic alignment and tactical execution are rarely this flawless or fast in most organizations. Purpose and strategy often get very muddled either because there are too many leaders who aren’t in agreement, or the strategy is nothing more than a vision without a plan. Whatever the cause, when leaders aren’t definitive, employees are less engaged and often directionless.

This is where story helps. Clarity stories are memorable and provide hands-off direction. For the Senator, we matched stories to every one of his legislative priorities. The stories drew from his personal experiences as a county prosecutor fighting for crime and fraud victims; as a father of eight and a grandfather to [now 20] who cared deeply for the health of all children and their mothers; as someone who lost a daughter in a car accident and wanted our roadways to be safer; as a nature-lover who sought to preserve the Great Lakes region; and many more.

Knowing these stories made it possible to do our jobs when access to the Senator himself was often severely limited by his demanding schedule. Because of the clarity stories, the staff had direction, discretion, nimbleness, and a level of independence that would have been impossible if every issue that came down the legislative pike needed to be vetted by him personally.

It’s rare to claim that business could learn something from government, but in this one area, organizations would be wise to look to elected officials and start to get their clarity stories straight.

Amanda Marko, President and Chief Connection Officer of Connected Strategy Group, is Anecdote’s partner in the United States. Storytelling complements her work to help leaders increase their influence through deeper connections that enhance the effectiveness of business strategy, change management, employee engagement, and corporate culture initiatives. Connect with Amanda on: