How to get on Millionaire Hot Seat

I was the first contestant on the Millionaire Hot Seat for the night. The host, Eddie McGuire, was beaming at me just behind the monitor that was about to flash up my first question. We started off with the usual banter that begins the show and he asks me about my dad.

“Wasn’t your father in the US Marines Shawn and helped with the JFK assassination investigation?” Eddie knows I have this story ready to be told. 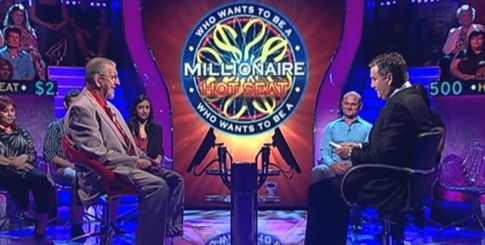 My father was a sharp shooter in the Marines in the 1960s and after Kennedy’s assassination Dad and two other military riflemen–one was an Olympic marksman–were ordered to re-enact the shooting. They set up a tower to the same height as the book depository window. A moving target was created and the three shooters used the same rifle type Lee Harvey Oswald used.

They didn’t even come close to being able to get off the same number of shots in the time period or come close to hitting the moving target. They submitted their findings to the Warren Commission feeling that the case was closed: Oswald couldn’t have been the shooter. But as we know history took a sharp right.

I was off and running. Now to answer some questions and have my shot at winning a million bucks.

How they select contestants for the show

First and foremost Millionaire Hot Seat is an entertainment show. They are looking for people to be entertaining. Sure, you need to answer some questions but they are interested in your story. And to be selected it helps if you have a number of tales to tell.

For me the selection process started with an online form. Fill in your particulars and answer some questions.

Then wait… And wait some more.

Eventually you get an email inviting you to an audition with hundreds of other contestant hopefuls. We were all in a university lecture theatre for half a day. It was a culling process beginning with showing everyone 20 multi choice questions. If you got more than 17 right you went through to the next round.

It was brutal. Round after round people were ushered out of the room when they dropped below the correct answer cut-off. The couple next to me had driven 2,200 kilometres from Alice Springs to be on the show and were sent home after the first round.

For those remaining we now had to do a screen test. In front of a camera we were asked to tell a story or two about yourself or your family. This was a surprise to everyone and many people bombed at this point. You could hear the groans ripple through the audience when we were told we had to tell a story.

How to find a story to tell

A good story is a moment in time that when you tell it your audience can visualise it actually happening. And it is even better if it’s an emotional story.

So think about those major changes in your life. How did you end up auditioning for the show? What happened that got you in the job you do? Do you have a funny story about how you met your partner?

Then tell these stories to people and see how they react. Out of, say, 20 stories you might get three that people love. These are your keepers for the audition.

My episode was filmed on November 23rd 2009. I started off well, answering the first 5 questions without much trouble. Then I hit a question I didn’t know.

Comments Off on How to get on Millionaire Hot Seat