The Mahout, the Elephant and the Path—an analogy for change

Dan and Chip Heath have a new book coming out (Feb) and they sent me a copy of the first chapter. The title is Switch and like their last best seller, Made to Stick, it promises to be a keeper. It’s all about how to motivate people to change. The first chapter has left an indelible impression because of the strong image they conjured to explain what we need to consider to influence change: the Mahout (they call it The Rider), the Elephant and the Path. 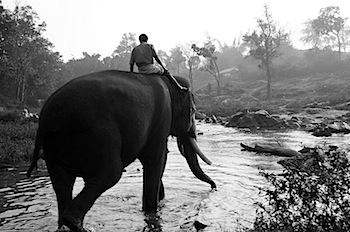 Changing behaviour involves a struggle between our rational and well-reasoned thinking and our emotional urges. The mahout represents the rational and reasoned. If the mahout clearly understands where he needs to go he’ll direct his charge that way.

The elephant represents emotional urges. While the elephant might be happy to go the way the mahout directs, if she decides to go another direction there is not a single thing the mahout can do about it.

The path represents anything that might impede or assist the mahout and the elephant to get to where they are going. You want the path to be as easy to follow as possible.

So how does this translate to a business setting? Imagine you’re a leader of an organisation that’s decided to compete on exemplary customer service. To engage the mahout you need a clear rationale describing why customer service is so important. You would find the research that shows the factors that influence customer service and illustrate to the mahout in everyone the concrete actions you want them to take. Engaging the Mahout, however, is the easy part and the one most organisations spend most of their time doing. The hard bit is the elephant.

Engaging the elephant, the emotion, will take action and stories about things that happened. You might start by telling some stories of customer service blunders to grab their attention. Here’s one that happened to me recently. It’s important you find stories from the organisation. Real life examples. Negative stories, however, often in themselves wont change behaviour, partly because people don’t know exactly what they need to do to get it right. So you also need to find stories of great customer service from your company. We call them Gibson stories because William Gibson (the sci-fi writer) once said: “the future is already here; it’s just unevenly distributed.” You just need to find these stories that represent your company’s future. Tell them. Get people to discuss them. Inspire that elephant.

After engaging the mahout and the elephant you need to pave the path and remove anything that’s getting in the way of progress. This might be a rewards system that’s encouraging the wrong behaviour. Or it might be an IT system that is unintegrated and hard for call centre staff to use slowing down their support for customers. There are a myriad of obstacles to remove from the path.

Don’t forget, the Heath brothers were the authors of Made to Stick which dedicates a chapter to the power of stories. Chapter one is full of great stories. Some you might have already heard, such as the 424 gloves that save a company millions or the 100,000 lives saves by the Donald Berwick and the Institute for Healthcare Improvement.

The Heath brothers conclude the chapter by saying:

Whether the switch you seek is in your family, in your charity, in your organization, or in society at large, you’ll get there by making three things happen. You’ll direct the Rider, motivate the Elephant, and shape the Path.

4 Responses to “The Mahout, the Elephant and the Path—an analogy for change”