The importance of deliberate practice

It took me a little while to work out what was happening. I snapped my first photo of the motor scooter with clip board attached in Soho but I only got a fleeting glance and then he was gone. 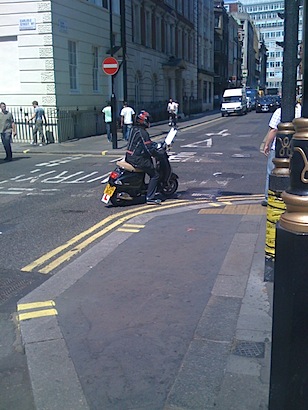 But my next sighting was far more informative. This time the motorcyclist was parked so I asked about the clipboard and what he was doing. It turned out he was learning to become a London taxi driver; he was learning was they call, “the knowledge.” 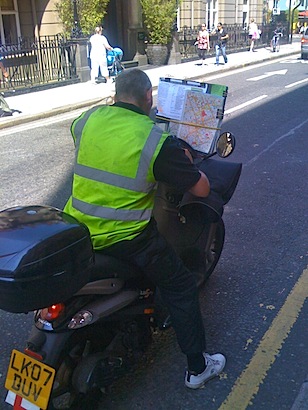 It takes between 2 and 4 years to learn the 320 routes (they call them runs) required to pass the tests. The student is given 20 runs at a time to memorise and they ride their scooters along the routes remembering the vagaries of one-way streets and where the traffic jams happen, as well as the notable sights a tourist might want to see. The guy I was chatting to said the first 20 runs seem like a jumble but when you learn the next set of 20 patterns begin to emerge as one run partially coincides with another.

I’ve just finished reading Geoff Colvin’s book, Talent is Overrated. His central theme (which I believe is shared by Malcolm Gladwell’s Outliers, which I haven’t read yet), is that high performers are not merely naturally talented (and perhaps talent has little to do with it), but they also engage in deliberate practice. That is, they design and perform a program of activities focussed on developing specific skills. For these future black cabbies they were deliberately developing their navigation skills in the pursuit of passing a test and at the same time actually enlarging part of their brain.

In Colvin’s book I was taken with the story of how Benjamin Franklin developed himself a program for improving his writing skills.

“First, he found examples of prose clearly superior to anything he could produce, a bound volume of the Spectator, the great English periodical written by Joseph Addison and Richard Steele. Any of us might have done something similar. But Franklin then embarked on a remarkable program that few of us would ever have thought of.

One of the faults he noticed was his poor vocabulary. What could he do about that? He realized that writing poetry required an extensive “stock of words” because he might need to express any given meaning in many different ways depending on the demands of rhyme or meter. So he would rewrite Spectator essays in verse. Then, after he had forgotten them, he would take his versified essays and rewrite them in prose, again comparing his efforts with the original. ”

This has got me thinking about what would a program of deliberate practice for developing your storytelling skills look like. Any suggestions?

9 Responses to “The importance of deliberate practice”