What do we mean by tacit knowledge?

Most of our work here at Anecdote involves working with tacit knowledge. But it is clear that there is a broad understanding about what’s meant by the phrase. In the knowledge management world there are two camps: one that believes tacit knowledge can be captured, translated, converted; and the other that highlights its ineffable characteristics. I must admit I was for a long time firmly ensconced in the latter category and our white paper on “How we talk about knowledge management” reflects this view. But I realise now it is simply impractical to adopt an either/or perspective and so I would like to propose a way forward that focusses on why knowledge is tacit (remaining unspoken, unsaid, implied, unexpressed) and then based on these reasons we can start thinking about the appropriate approach to capturing or transferring tacit knowledge. 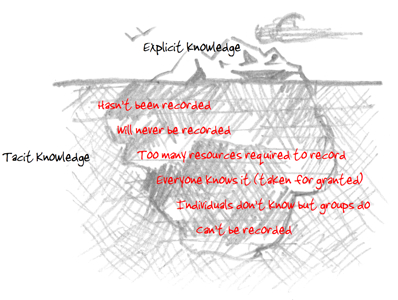 I think the iceberg metaphor is useful. Below the waterline lies an organisation’s tacit knowledge. Near the water surface lies tacit knowledge that’s easier to work with but as we go deeper the nature of the tacit knowledge changes, it becomes murkier and harder to see and grasp. As we increase in depth we can think of the different reasons why our knowledge is unspoken.

Hasn’t been recorded. Most organisations put their efforts in in dealing with this type of tacit knowledge. Probably because it’s easy. “Let’s find out what we know and then document it.” As a result wikis are popping up everywhere. Creating more explicit knowledge then creates a new problem of findability And as Peter Morville says, “what we find changes who we become.”

Will never be recorded. There are some things you know, that you could quite easily tell someone else, that you would never want to write down or be widely known. Imagine a diplomat who has an intimate knowledge of their counterpart’s peccadillos in an allied government. Perhaps not the type of thing that would be written down. More benign examples include stuff ups and when people are breaking the rules for the right reasons (or even for the wrong reasons).

Too many resources required to record. Sometimes it just takes too much time and effort to write down what you know. For one thing, when you write it down you have to assume a broad audience (not like a conversation where you are assessing whether the person you are taking to is getting it), which makes the task even harder. Imagine Einstein walking in the room and someone without advanced physics knowledge asking him to explain the general theory of relativity. It would be impossible for Einstein to provide a comprehensive answer because his knowledge requires stimulation in order to be forthcoming. Dave Snowden encapsulates this idea in his aphorism, “you only know what you know when you need to know it.”

Everyone knows it (taken for granted). Now we are getting into the type of tacit knowledge that’s more difficult to identify. This knowledge often represents the core values and beliefs in an organisation. It can manifest as metaphors. For example, I visited a investment bank in Sydney and their language revolved around gambling: “We can take a bet on that.” “Let’s roll the dice and see what happens.” “Everyone was poker faced.” Another organisation was fixated with traffic metaphors: “It’s a real roadblock.” “We got the green light.” “We have a clear roadmap now.” No one noticed how they were using these metaphors yet it guided their actions every day. I guess we call these things ‘culture.’

Individuals don’t know but groups do. Have you ever read Cognition in the Wild? It tells the story of the bridge crew of the aircraft carrier USS Palau and how together they can dock this enormous ship yet no single individual could describe how it is done. Many teams have this underrated and generally unrecognised this group-based ability.

Can’t be recorded. Much of our tacit knowledge falls into this category. The effects of this type of tacit knowledge (some would say the only true tacit knowledge) are displayed in our action and therefore it’s impossible to capture or convert it. The approach here is to become mindful and reflect of what is displayed—conversations, coaching, shadowing. Sure, we can video tape people undertaking tasks but time and time again practitioners have discovered there are qualities that are not captured and the task cannot be completed successfully. My favourite example is those white-coated gentlemen in France who test whether those humungous wheels of cheese have ripened. Using a little hammer they tap each one and know instantly which ones are ready to eat. How do they know? Is it the sounds, the bounciness, the smell? I recall a group of scientists set about to measure all these characteristics in order to create an automatic cheese ripeness testing machine but as hard as they might try they paled in comparison to the experience of the practised cheesemaker.