A while ago I argued that the target metaphor was inappropriate for change projects. The idea that anyone could accurately define a change target, aim at it, and then hit it with a well shot arrow was, at best, an illusion. In most cases the possible, beneficial end states are wide and varied. 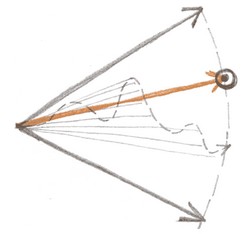 So the question is, how do you define an intent that provides direction, inspires action yet is not overly prescriptive? John F. Kennedy provides a good example.

In his now famous ‘man on the moon’ speech, Kennedy kicked off the US entry to the space race with the following goal:

First, I believe that this nation should commit itself to achieving the goal, before this decade is out, of landing a man on the moon and returning him safely to the earth.

This statement of intent is concrete (landing a man on the moon), active (landing, returning, achieving), simple, time bound (before this decade is out), and is in the form of a mini story (land the man and get him home safely).

The military are well versed in providing strategic intents for missions because they know that No plan survives contact with the enemy. Chip and Dan Health explain the military’s use of commanders intent (CI).

CI is a crisp, plain-talk statement that appears at the top, of every order, specifying the plan’s goal, the desired end-state of an operation. At high levels of the Army the CI may be relatively abstract: “Break the will of the enemy in the Southwest region.”

These examples provide a sense of what a change management team needs to achieve, but we still need a way to develop a useful intent. As you might guess, my suggestion is largely participative, using stories and question-based. But I have run out of time to finish this post so I will write another making some suggestions on how you can create your strategic intent for a change management program. In the meantime any other examples or descriptions of how you do it would be appreciated.