Intention in a complex system

For the past four years I’ve used the Cynefin framework to help managers to understand the varied nature of the issues they face and to appreciate that some of these issues are better understood as complex adaptive systems. The beauty of the Cynefin framework is that it accepts the validity of rational, linear, and mechanistic explanations, but it does not regard these as universally applicable for all problems.
Using the Cynefin framework typically consists of groups of people working together to develop a consensus on the nature of the issues being considered—known, knowable, complex, and chaotic. In applying this framework, it becomes apparent that the range of possible outcomes increases as one moves through the domains from known to knowable to complex to chaotic. As the diagram illustrates, an issue in the known domain has a single and clear outcome—a best practice. An issue in the knowable domain has a limited range of possible outcomes—a set of good practices. Complex issues pose a more difficult conceptual challenge. To understand this, it is necessary to explore the idea of ‘intention’. 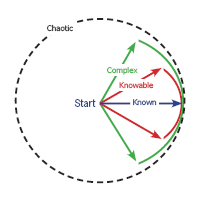 A natural complex adaptive system—as distinct from an intentional system—evolves without purpose. Over an extended time, it is impossible to predict the outcome of, for example, the evolution of a species—because the direction of the natural system results from a complex co-evolution among the agents and their environment. Some agents thrive as the environment and agents change, whereas others perish. A recent example in Australia is the ‘Mangrove Monitor’—a reptile, which, until recently, has thrived in Australia’s north. The monitor is now under threat as poisonous cane toads migrate west from Queensland. The lizard’s previously successful strategy of eating frogs is now wreaking havoc on the monitor population as it eats cane toads instead of frogs.
In contrast, businesses have intention or a purpose. As Charles Handy points out, an organisation’s basic purpose is simply to exist and, through its existence, to achieve things that individuals cannot achieve. More specifically, however, organisations exist to achieve something which might be stated in their business strategy or, as suggested by Henry Mintzberg, their strategy has emerged and recognised in hindsight. Either way, a business has a purpose. When applying the Cynefin framework to organisational issues, any issue that is defined as ‘complex’ should at least be heading in a direction that is not in conflict with the purpose of the business. For this reason, in the diagram, I have drawn the range of possible outcomes for complex issues as being finite, but wide.
It is important to remember that each ‘complex’ issue is unpredictable. Therefore, whenever an intervention is implemented it is critical that monitoring is undertaken to observe the patterns that emerge. Unwanted patterns (those contrary to the organisation’s intentions) must then be disrupted, and beneficial outcomes must be nurtured. In dealing with complex issues, no end point is ever reached.
Finally, a chaotic issue can, and will, head in any direction. Because patterns are indiscernible, it is impossible to monitor and intervene as we would in the complex domain. The possibilities are limitless.
Is this a useful way to conceptualise the Cynefin domains?