The Uncanny Valley of Business Storytelling

Why do some business storytelling efforts fail spectacularly? I hear sponsors of some of these failed attempts (they’re brave enough to call us in after their bad experience) saying, “storytelling just didn’t suit our culture” or “we just didn’t click with the person we brought in to help us.” I suspect these are merely superficial explanations.

We’ve focussed our attention on the Small ‘s’ end of the spectrum (the anecdotes, the real life experiences) and have inched our way toward the Big ‘S’ end, but not too far for reasons I’ll explain in a moment. There’s lots to learn from the Big ‘S’ end but business people don’t need to be screenwriters or playwrights. Putting too much storytelling craft in how you communicate can lead you to fall into an even bigger trap. And this trap is similar to one discovered in robotics in the 70s.

In 1970 a Japanese robotics researcher, Mashahiro Mori, noticed that as he made his robots more humanlike their attractiveness increased, but only to a point. After that they became creepy. It was only when it was impossible to tell the robot from the human did they become attractive again. Mori called this dip in comfort levels (Shinwakan) the Uncanny Valley.

We witnessed the impact of the Uncanny Valley at the movie theatres in 2004. Pixar released The Incredibles at the same time Warner Bros. released The Polar Express. The Polar Express used live action performance capture techniques to make almost humanlike animated characters with an eerie result; not what you want for a Christmas tale. The Incredibles were clearly animations and it became a box office hit. 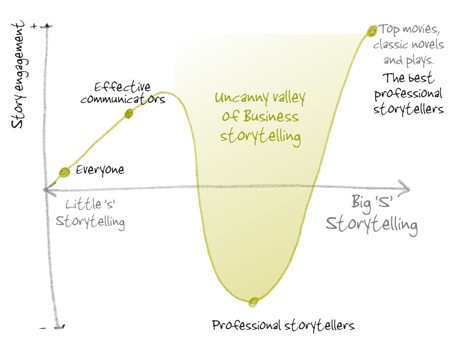 Yes, you can learn a lot from Big ‘S’ Storytelling but it’s folly to try apply too much. In the end so much can be achieved just helping people to be mindful of their experiences and the experiences of the people around them and work out what these experiences mean. With this understanding recounting an experience can be a powerful illustration of what you believe is important. And told as a story on the gentle hills above the valley will mean people with remember it and maybe even be inspired to take action.