Last week I was working with a client in Sydney, preparing a senior leader to present a new strategy to their people using a strategy story.

We designed the presentation so that the strategy story could be told without slides. We wanted the leader to just talk with their employees about the strategy and why it was happening. But the story sat inside a bigger presentation, so there was a holding slide for where the story would be told, with the company logo emblazoned on a bright white background. 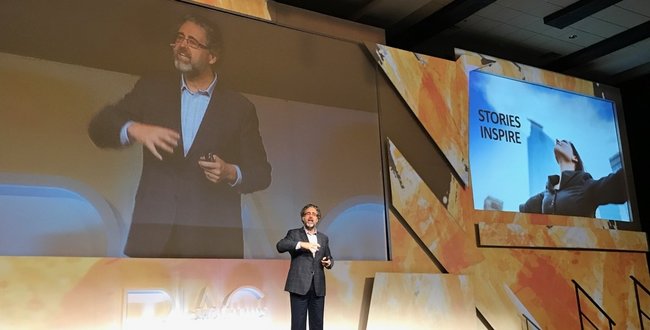 I suggested that the holding slide should be blank (all black) to focus the employees’ attention on the leader as they related the story. But I was told that this might confuse the audience, causing them to think the presentation had gone wrong.

Companies have gotten into bad habits using PowerPoint, wielding it in ways that detract from the objective of helping people to understand, remember and apply what they have learned.

The rejection of my slide-blanking-suggestion was a minor transgression. A much bigger problem is when leaders want to use their slides as a teleprompter. Yes, this might make it easier for the presenter to remember what to say, but it makes it harder for the audience to understand and remember the content.

Researchers have known since at least the 1950s that humans are prone to cognitive overload. If there is too much stimuli from multiple sources, we get confused because we have relatively small working memories. Several major inputs will split our attention.

In 1999, researchers at the University of New South Wales published the results of a study into cognitive overload, specifically the situation where people are simultaneously talking and showing text and a diagram, just like a PowerPoint presentation.1 When participants were shown a diagram with text descriptions while listening to an audio explanation, they had to double the number of times they performed the exercise to understand it compared to just having the diagram and text.

Professor John Sweller later summarised the research by saying, “It is effective to speak to a diagram, because it presents information in a different form. But it is not effective to speak the same words that are written, because it is putting too much load on the mind and decreases your ability to understand what is being presented.” 2

So when using PowerPoint at work, show your diagrams and graphs and explain them orally. But don’t fill your slides with dot-points of text and then say the same things in different words, as if you are summarising what’s on the slide. This is a sure-fire way of ensuring that your audience walks away with nothing but disdain because you’ve wasted their time.