Connecting People: How to Foster and Harness Your Organisation’s Connectors

I wrote this article with Stewart Forsyth from FX Consultants. Stewart and I have done a few projects together in New Zealand and it is always a pleasure working with him.

While passers-by see the granite and glass of high-rise buildings, well-connected people think of the organisations within as collections of interesting people they want to meet. Mention a business and these ‘connectors’ will spill out the names of key informants and decision-makers. Connectors know lots of people.

One of us worked once with a business developer who, no matter what south-east Asian city he was in, always had names and contact details of locals in his PDA. According to legend, he was once arrested and thrown into a cell for not having the appropriate visa, but he was out within hours—he wangled a call to a mate who had the right connections. Connectors have the happy knack of getting things done, often making it look so easy in the process.

Connectors such as these are the human circuit-makers through which ideas, opportunities and resources flow. They ensure that the products proposed by R&D teams can be made economically and will sell. They help their organisation to spot competitor activity and environmental shifts that present threats and opportunities to be managed. They pick up even the weak signals. In our view, the informal connections made by your people are more important than the formal channels in getting the job done. The benefits to your business are increased responsiveness and adaptability.

Our emphasis is not only on how these people work. We want to help you mobilise their capabilities, and so your organisation’s capability. Specifically, how do you identify and develop people with connector potential?

Looking at the level of team performance, there is good evidence1 that teams with effective connectors are more productive. Just schmoozing and collecting information is not where it’s at. In fact broad environmental scanning can be counter-productive. Two purposeful sorts of connecting make a difference—promoting the team and securing resources, and reinforcing linkages with other groups in the work flow. It is just impossible for the team to know everything, so it is critical that they can find the person who has the requisite knowledge or skills.

Assuming that you want to build the effectiveness of your up-and-coming connectors, to keep your teams and your business plugged into break-through thinking and emerging opportunities, what would you look for?

The behaviours of those who manage to develop networks across and beyond the organisation seem to include2:

Using social network analysis (or even analysing email traffic, or nominations for 360-degree reviews) could help you identify those who have the mix of both strong (and deep) and weak (but extensive) ties to people in other groups, inside and outside your organisation.

A ‘quick and dirty’ approach (and illustrating what we mean by ‘connectors’) is to identify those people who are likely to be connectors based on their role or some other identifiable characteristic. Here is our first cut of connector categories. Our contention is that these types of people are most likely to be connectors—there are of course others.

It is useful to pause for a moment to consider the network structures of which connectors form an integral part. As we have suggested, connectors are hubs. For example, in Figure 1 the main connector is Louise. People come to her and she connects to others. Nick is also a connector. 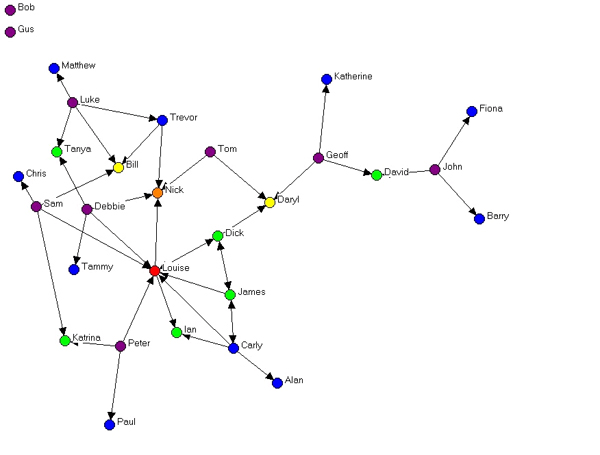 The biggest connectors—the ones with the most connections—by their very nature will attract further connections. This ‘rich get richer’ feature is predominant in social networks. The highly connected will always have an advantage over new entrants. It’s a bit like Microsoft’s DOS operating system: while it wasn’t the best system available, it became popular and so eventually became the de facto standard.

This is not to say that other connectors cannot emerge. If there is a dearth of connectors, new hubs will have space and will help to join up a network. But there is a carrying capacity of connectors in a network and you definitely don’t want a social network full of connectors because it makes the system unstable.

There are some similarities between effective connectors and entrepreneurs and leaders. Entrepreneurs, amongst other attributes (such as high need for achievement and resilience), have the ability to create, recognise and shape opportunities. Where do the opportunities come from? They are spotted by the entrepreneurs and then exploited through their networks.

Effective leaders also get results through people. Inspiring, supporting and developing the people in their teams or business groups are their most visible roles. But leaders also have to get resources (including people), develop a positive and relevant vision, and ensure the outputs that their people produce meet a market need. All of these tasks require networks—for obtaining resources, gaining environmental intelligence, and selling products (or meeting the needs of those further along the business process).

While we do not consider that effective connectors will necessarily have the full complement of entrepreneurial or leadership skills, aspiring entrepreneurs or leaders do need to develop the connecting skills that will improve their capabilities.

We think it is also important to highlight another, less positive, similarity—that between connectors and some personality disorders. You may have met some delightful people who were not all they claimed to be. He (males are disproportionately represented in this group) is charming, articulate, plausible, and usually with very good connections—or at least good at dropping the names that indicate he has such connections. It usually takes time before people realise that the appearance is a sham, that if this person delivers at all, it is based on ‘borrowing’ the effort and output of less visible others.

This is a description of an organisational psychopath. While the people who leave a trail of broken promises and unfulfilled hopes in organisations may not be violent, or even fully fit the clinical definition of psychopathy, it is possible for their ‘sub-clinical’ behaviour to be very disruptive and counter-productive.

In promoting the careers of up-and-coming connectors, especially to the point where they represent your business and personify your brand, you need to know that they have an interest in sustaining your business’s reputation as well as achieving their own immediate gratification.

Connectors may not bring in the greatest amount of business, but they are building your capability to do the business.

Stewart is Director of FX Consultants, an organisational improvement consultancy known for its creative approaches to lifting individual, team and organisational performance http://www.fxc.co.nz

Comments Off on Connecting People: How to Foster and Harness Your Organisation’s Connectors