Storytelling skills around the world: who can spot stories the best? 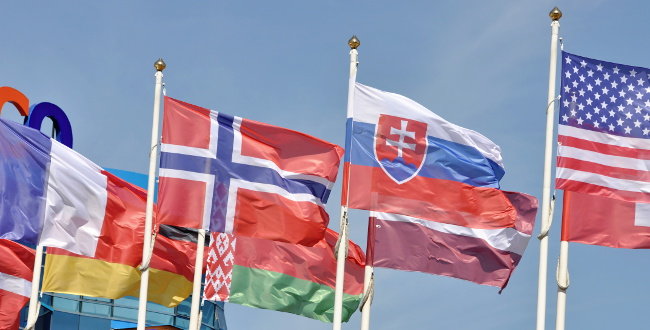 20 March is World Storytelling Day. On that date back in 2011, we launched TheStoryTest.com, a website designed to help people develop their ability to spot stories.

We now have close to six years of data from across the globe about the ability of people to know what is and what is not a story. This article summarises some of the insights obtained from that data.

If you haven’t yet taken the story test, you should do so before reading on. It will only take you 10 minutes and you might get some insights into the foundation of business storytelling.

1. 5572 people from more than 112 countries have completed our story test. Interest in business storytelling is truly global!

2. The average score across all responses is 6.8 out of 10 points. This is pretty good, especially when you consider that a number of the ‘snippets’ used in the story test are deliberately grey.

3. The average score has remained very consistent over the past six years.

Unless otherwise stated, all the analysis below relates to countries with 10 or more responses.

1. The country with the best scores for story-spotting was … wait for it … Switzerland! The Swiss had an average result of 7.27/10 across 52 responses. Here is the complete ‘top 10’:

2. One of the insights from the data is that story-spotting across the world is uniformly good – 24 countries are within half a point of the top score of 7.27.

3. There is considerable diversity among those 24 countries. Western Europe, Eastern Europe, North America, the Middle East, South Asia, South-East Asia and Australia are all well represented. A notable absence from the top 20 is South America.

4. One of the things that surprised me was the score for Ireland, especially given how storytelling is synonymous with Irish culture. It came in at no. 39 with a score of 5.56 across 25 responses. Perhaps the scores would have been higher had the survey been completed over a glass of Guinness.

Some of the examples were easier than others. Approximately 84% of people correctly identified this snippet as a story:

Arriving in Hollywood in the late ’60s as a young man, a fast-track ascension up the career ladder seemed challenging to me. The men at the ‘big table’ who made the major decisions were all in their 60s with white hair or no hair. I needed to distinguish myself from colleagues who had similar aspirations to mine. I did it by solving a problem that the senior executives didn’t even know they had.

When any movie is made, one of the most critical decisions is who the director will be. This choice was currently being made by the central figure at the table who I once heard announce that he ‘had a tuna fish sandwich yesterday’ with a particular filmmaker and he believed he was ‘available’. Was the criteria for choosing a filmmaker based on a tuna fish sandwich and being available?!

Even in those pre-internet days, I had a sense that information was currency, so I set about organising data about all the Hollywood directors on a cork wall in my office with thousands of stick-pins. Like a giant Wikipedia, everyone coming or going could add to it or take from it information about the availability, propensity for staying on budget and core strengths of all the directors, cross-referenced against other categories, as well as talent.

Without realising it, I’d constructed a launching pad for my career by giving concrete form to the call to action of my tuna sandwich ‘Ah ha!’ moment – the story I’d tell to every visitor who asked why I was doing this giant board of directors. By surrendering control of my board of directors, I allowed my listeners to embrace it, participate in it, and own it. One person told another my story, who told another person about the story, which brought more talent and influencers to my office, and my star steadily rose.
Source: Guber, P. (2011). Tell to Win: Connect, Persuade and Triumph with the Hidden Power of Story. Crown Business, New York.

The most difficult snippet to get right was this one – 50% of people thought it was a story, but it’s really just an assertion that contains a bathtub analogy:

One of the most high-octane advocates of telling to win that I know of in any business is Mark Burnett, who pioneered reality television. Since 2001, Burnett has been nominated for 48 Emmy awards for series such as Survivor, The Apprentice, The Contender, Martha Stewart, Are You Smarter than a 5th Grader? and The MTV Awards. Because Mark has turned personal enthusiasm into career rocket fuel, I wanted him to discuss this element of the tell with my UCLA grad students.

Burnett was even more emphatic than I’d expected in stressing the role of passion in the telling of business stories. ‘Our success or failure is determined by our level of energy’, he said flatly. ‘I tell my people, “Much more than our creativity, our level of energy inspires the people around us”.’

To explain how this works, he told the students the story he tells his employees: ‘The problem for successful businesspeople is really one of energy conservation. I put in a 14-, 15-, 16-hour day, and I need so much energy. Think of that figuratively as a bathtub full of water that you fill every morning to the brim. You crack that plug and let it drain, so by the time you come home, the last drop has gone through the drain’. Ideally, he emphasised, there’s still some energy in the tub to get you home, but if you’re confronted by ‘energy suckers’, you’ll be running on empty before noon.
Source: Guber, P. (2011). Tell to Win: Connect, Persuade and Triumph with the Hidden Power of Story. Crown Business, New York.

Perhaps one of the things that throws people in the Mark Burnett snippet is that the third paragraph says that a story is being told. Unfortunately, this is one of the most common things we see in the world of business storytelling – people saying something is a story when it’s not.

In case you’re wondering, here is the framework we use to test if something is a story or not

Time to tell some stories

Remember that you can’t get the benefits of storytelling unless you’re actually telling stories. It’s one of the reasons we created TheStoryTest.com.

If you’ve got a question about this analysis, just pop it in the comments field below and I’ll try to answer it.