Letting a story do the work

Posted by  Kevin Bishop —May 9, 2012
Filed in Business storytelling, Fun

Shawn and I have spent the last couple of days working with a client helping them create their strategic story down in the Mornington Peninsula. There are certainly worse places in the world to spend a couple of days than at a winery in such a beautiful spot. It was a throughly enjoyable off-site, made even more so by working with such an energetic, passionate and fun bunch of people.

During lunch yesterday I noticed that Harry, the guy sitting beside me, was checking his emails, and on his screen was the image below from The Sun newspaper. 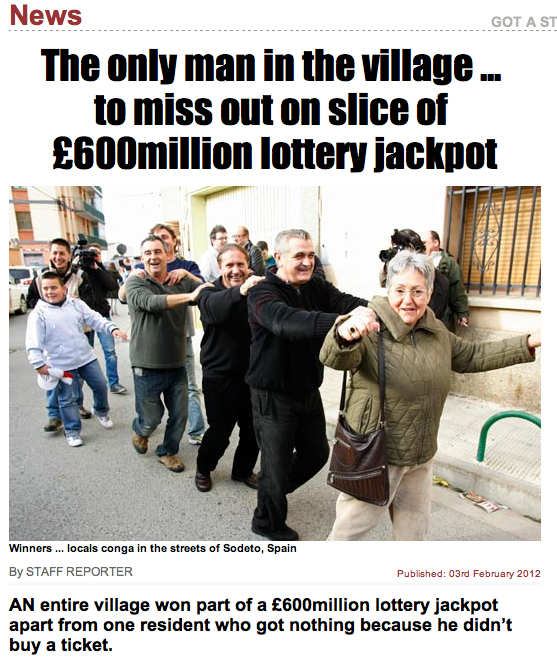 Obviously curious I asked him what that email was about. He laughed, and then explained it was from one of his guys who organised the teams lottery syndicate. That night was a $70 million jackpot prize on offer in the OZ Lotto, one of the biggest prizes in Australian lottery history, and as yet he hadn’t signed, or paid up.
There was no other text in the email. All the person did was send on this story about how an entire Spanish village won part of a £600 million ($960 million) lottery jackpot apart from one resident who got nothing because he didn’t buy a ticket.
That was it. They let the story do the convincing. And it worked.