People are highly sensitive to social norms – information about what other people are doing and what they approve of. You can use the concept of social norms to help drive and create change.

While researching the drinking habits of American college students, H. Wesley Perkins and Alan Berkowitz discovered that most students thought that the norms for both the frequency and the amount of drinking among their peers were higher than they actually were. In other words, they thought that everyone else was drinking way more than they were, which meant they ended up drinking more themselves.

The story they were telling themselves whenever excessive alcohol consumption came up was: “That’s not me. Everyone is drinking way more than me.” The social-norms approach aims to correct misperceptions like this.

A good example of how such a belief has been challenged comes from Georgetown University. In 2009, Georgetown launched its “You Don’t Know Jack” campaign, featuring the university’s beloved bulldog mascot. Posters went up that each featured a relatively unknown, fun fact about Jack, accompanied by a statistic concerning the drinking habits of ‘Hoyas‘, the collective name for supporters of the various Georgetown University athletic teams. 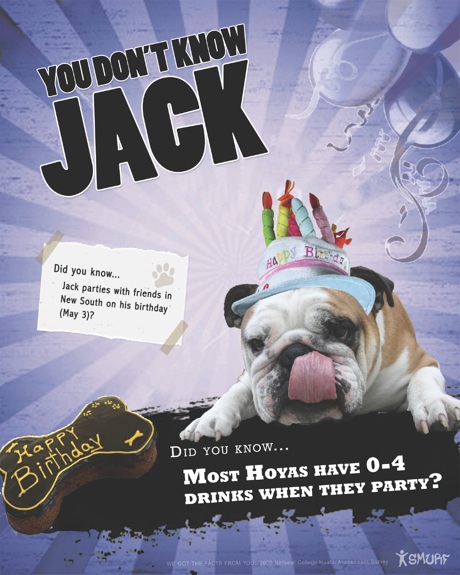 Comments Off on Using social norms to change behaviour