How to connect with the “I’m Like You” story 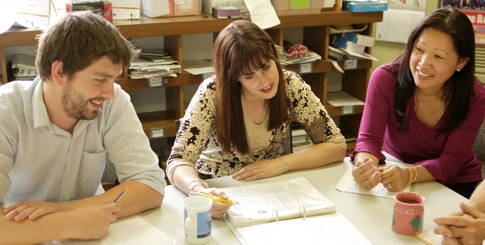 Annette Simmons says that there are some story types you just should know and be able to tell, namely: Who am I? and Why am I here? I’d like to add another story type which will help you to connect, which I’ll call the “I’m Like You” story.

Robert Cialdini describes a fascinating experiment in his book Influence, which I’ll recall from memory. The experimenters write a letter first in English and slip it into a wallet, include some cash and then leave the wallet in a public place. When they left the wallet in a predominantly English speaking neighbourhood the chances of it being returned were much higher than leaving it in a non-English speaking neighbourhood. Then they wrote the letter in Italian and as you might expect the letter was returned more often than not when it was left in the Italian neighbourhood and so on. People like people who are more like them.

Last year Mark and I were giving a talk to the commercial division of an insurance company on how to be better business storytellers. We were told before hand that the newly appointed CEO would arrive somewhere in the middle of the workshop to give the group of 200 or so people a short talk. This was the CEO’s first encounter with the commercial division. The CEO’s minder gave me the signal that the Chief was ready to talk and he strode in confidently and said, “One of my first jobs in the UK was underwriting water boilers in the north of England; they wouldn’t trust me with anything more complicated. I remember one very cold morning …”

The CEO set about telling three short stories of how he’d done insurance work in the past and how he’d had some understanding of the work the division did. At the same time he didn’t make himself out as an expert, rather he was clearly sympathetic to some of the challenges the job presented. The stories, like all good personal anecdotes, gave everyone a sense of the type of person he was: no nonsense, hard working, fair, with a sense of humour. Of course it’s impossible to tell what people were thinking but the audience body language suggested he had their attention.

We can relax a little when we know the people we’re with are like us. We speak the same language (including the jargon), hold similar values, have similar interests and share similar stories of success and failure. There’s a much better chance that when we are with people like us they will care what we think and say.

But you can’t merely assert you’re like others. You need to provide the evidence, and in social settings evidence is supplied as stories. You need to tell I’m Like You stories.

Now here’s the catch: we judge stories on their relevance and plausibility. In this case relevance is rarely a problem because any story that shows you have some similar experience as your audience will help make the connection.

However, if you haven’t worked a salary job for a single day in your life, are a multi-millionaire inherited from your aristocratic family and then attempt to tell a story of how you toughed it out as a young fella as a way to connect to, say, your factory worker constituents (which UK politician might I be thinking about?), then there’s a good chance their bullshit detectors will sound loudly.

So start with your audience. Understand what they do. What do they value? Then search your own personal experience for something similar. Eek out an anecdote no matter how small that shows you have lived some of their life. If you come up empty think about you parents’ experiences. Never pass their stories off as your own (moral sin of storytelling) rather just tell people what they’ve told you. For example, my father was a US Marine and I’ve shared some of his experiences which helped me connect to military folk I’ve worked with over the years. And if you still have nothing don’t even try to pretend. That’s when you rely on the other story types to help you connect.