The second Tuesday of every second month the Strathmore Unicorns Junior Basketball Club’s committee meets. I’m the club Secretary and last Tuesday we were discussing the perennial topic of how to encourage our players (and their parents) to pay their registration fees on time.

Each year the Treasurer send a letter to laggards warning them that if they don’t pay their fees they will not be insured and wont be able to play. This letter might have worked in the past but over the years coaches rarely stop their players from playing because of outstanding fees. So unless we become more draconian, the threatening letter approach has run its course.

As everyone was chatting I was recalling Influencer’s six sources of influence and based on that model I suggested an alternative that appealed to personal and social motivation of an important person on every team: the team manager. 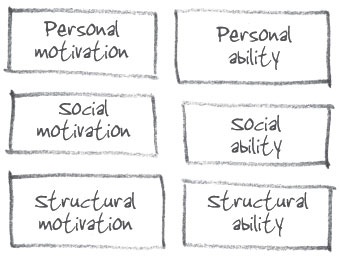 Here are my two suggestions. Love to hear yours in the comments.

Personal motivation initiative: we are creating a one-page handout describing why the team manager is an important role and listing four things every manager must do to be great at the job. The first on the list is to collect registration fees on time. I did think we should include a short story of how a manager did one of these tasks (more on this idea below).

Social motivation initiative: For the next four months we will share with all the team managers the overall percentage of teams that are all paid up and either congratulating them of getting all their fees in or encouraging to be as good as the rest. The overall percentage at the outset will be large which will send the message that most people are paying (social proof).

To add to this thinking I discovered this morning some important influence research which shows how stories can be added to this mix with tremendous effect. Over at the Inside Influence Report Noah Goldstein reports on Adam Grant’s research showing that reminding people of the meaning and significance of their work can double their productivity. And he did this by simply sharing stories from those people who benefited from the call centre worker’s hard work: in this case benefactors of a fundraising organisation.

Here is how Grant ran his experiment.

Working in a fundraising organisation call centre, Grant divided his participants into three groups: people who were reminded of their personal benefits of the job; people reminded of the significance their tasks was having on the benefactors of their work; and the control group. The personal benefit group read stories from other employees about the benefits of the job such as money, skills and knowledge. The task significance group read stories from the people the organisation was giving scholarships to and how these scholarships effected their lives. The control group didn’t hear any stories.

Here’s how Golstein reports the results:

So my question is who’s story does the team managers need to hear? I can’t imagine hearing a story from the committee of how getting the money in on time will motivate anyone. Perhaps it needs to be a story from one of the players that received a scholarship or from a parent in the under eights who gets reduced fees to get them started. Or maybe it is a story from one of the coaches who all just received new coaches tops.