What has Al Gore and Edward de Bono have in common?

On Tuesday I watched Andrew Denton interview Al Gore on Enough Rope, and on the following day I had lunch with Edward de Bono (with 300 close friends) kindly organised by the VPSCIN. Both presentations were impressive—engaging, thoughtful and enjoyable. With our recent work on helping people tell better business stories I was mindful of both what they were saying and how they said it. There are a number of reasons which explain their effectiveness. I’ve listed 5 and quote Al Gore from the Enough Rope transcript as examples.

Al and Edward plied the audience with facts. Edward started his presentation listing 10–15 projects, seemingly off the top of his head, where the systematic application of thinking skills saved organisations substantial amounts of money. I was thinking at the time, “how interesting that he focuses entirely on saving money as the major benefit of his work,” but I guess he’s learned that people are impressed by saving money.

Al Gore was also forthcoming with relevant facts. Again they were presented as if they were on the tip of his tongue and no effort was needed to recall each data point.

On Greenland, this past year, there were 32 glacial earthquakes between four point six and five point one on the Richter scale. That may sound like gobbledygook but, you know, a five on the Richter scale for an earthquake is enormous. And there were 32 of them this year on Greenland. That’s double the number in ’99. In ’99 the number was double the number in ’93. So that is evidence that what is almost certainly happening, there is a radical destabilising of that big mound of ice. So this is a realistic picture of what could happen if we don’t act.

Of course I was on the look out for stories and I wasn’t disappointed. Both speakers took opportunities to relay details of events that either happened to them or their colleagues or clients. Details are important. Al said, “Arnold Schwarzenegger went to see my movie in June” not just that he went to see the movie.

A lot of business leaders who used to oppose Kyoto have now endorsed it. Arnold Schwarzenegger and California, of which he is governor, just last week passed binding reductions in carbon dioxide, a very bold measure, the Democratic legislature joined with him. Arnold Schwarzenegger went to see my movie in June and he said “I’m going to get rid of my Hummer.” And he said some kind things about the movie and came to one of my book signings. There are now quite a few other state, nine north-eastern states, Pennsylvania, Oregon, state of Washington.

Metaphor and analogy for also a feature of both presentations. I quite liked this analogy between global warming and a child’s fever.

To put it another way, if you have a child who has a fever, and the fever persists, and it steadily gets higher, you go to the doctor. And you say “Please, let’s check this out. What’s the problem here?” Because it could be something bad. Well, the planet has a fever. And one or two degrees matters. Two or three or four or five matter even more. And it will continue to get higher until we stop dumping all this pollution into the earth’s atmosphere. It is extremely damaging.

Both presenters seemed like the were having a good time and when the opportunity presented itself enjoyed a joke with the audience. Edward even told a couple of jokes to illustrate the similarities between humour and creativity: in both cases hindsight provides the ‘ah ha!’ moment. 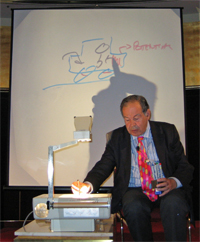 When you have two seasoned professional like Al and Edward, you expect them to know their content and looked relaxed. Have you ever seen Edward de Bono present. Well he does it sitting down using an overhead project while scribbling pictures and notes on a continuous roll of plastic as he talks. I was told to expect this delivery style with a warning that it was a little unprofessional looking. I totally disagree. His style is unique and suits his personality. Not for a moment did I find it distracting. This shows that every rule can be broken.

5 Responses to “What has Al Gore and Edward de Bono have in common?”