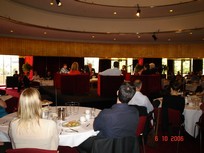 Today the VPS Continuous Improvement Network experienced something unique. With Larry Peterson (a well known Canadian Open Space Practictioner) touring Australia, we had a great opportunity to try a new format for exploring and engaging conversation around “Leading complex change and opening space”.

The format? A fishbowl. With Larry inside!

Although not Open Space Technology the 4 four principles and one law of Open Space certainly applied and contributed to the way the fishbowl ran.

The one law of Open Space invites people to take responsibility for where they are, and if they find that they aren’t learning or contributing, move to a place where they can. In this case, out of the fishbowl and allow for another particpant to join the conversation.

During the fishbowl Larry mentioned that Open Space was one of the most powerful technologies for change that he had worked with. I’d have to agree with him. The mathematician in me particularly enjoyed Larry’s description of how momentum = mass x velocity. And how for successful change it is important to have both elements in the equation. The whitepaper I wrote regarding the evaluation of an Open Space event I ran with a large scientific organisation seems to me to confirm how mass and velocity can result from the enhanced communication patterns and social networks created in Open Space Technology.

From the feedback it looks like people found it a very thought provoking session. I enjoyed it heaps! It was great working with Larry.