Antidotes to the metaphors we live by

A book that has found its way into my den as a result of our reflective practice on the language of facilitation is Metaphors we live by. It’s great.

Some examples of metaphors we live by are: 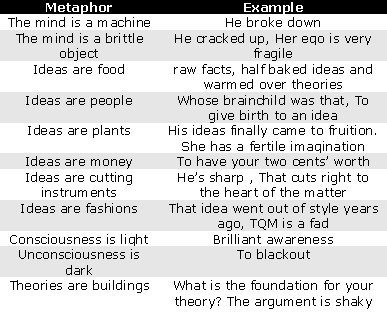 Consider argument is war, As Lakoff explains in Metaphors we live by:

Try to imagine a culture where arguments are not viewed in terms of war, where no one wins or loses, where there is no sense of attacking or defending, gaining or losing ground.

Imagine a culture where argument is dance, the participants are seen as performers, and the goal is to perform in a balanced and aesthetically pleasing way.

Another example is time is money. I wonder how things might be different if an antidote to this, say, time is play, was more prevalent in our society. Maybe that’s what the slow movement is about.

What are some other metaphors you live by?

What are some antidotes?