Anatomy of a Success Story

We’re going to look at the structure of a success story – it’s a six-event story and it’s quite different from a case study – as you’re going to see.

I’ll use this diagram so that you can see the six events as I tell you the story and then I’ll share with you some video from this story.

I’m going to tell you about David Masover, like me David is a very experienced b2b sales person – he’s worked as a salesperson account Manager, as a vice-president of startup in charge of sales development – but for the last thirteen years David has been a corporate b2b trainer and he’s an expert in sales process – he’s written three books on the subject! David had his early career in the United States but these days he lives in Hungary in Budapest.

Recently he decided to shift his business away from corporate consulting to coaching individual salespeople.

And originally that wasn’t so easy for him, he was pretty used to going out and reaching corporations, but how do you connect with individuals? That wasn’t quite so easy. And experimenting is unpaid work when you’re an independent consultant.

David and I connected on LinkedIn – I’d noticed some of his articles, (they were) excellent, I really enjoyed them and we connected. And in our email and LinkedIn discussions I explained to him that I was close to finishing (writing) the book Seven Stories Every Salesperson Must Tell

And I sent him the manuscript. I got a short email back saying he was really enjoying it and he was starting to see how we could work it into his sales process – getting sales coaching clients.

Then another email – very excited – and then he sent me his personal story and I provided some coaching feedback on that.

Just last week David and I connected on video conference for the second time and he told me how he was going and you may listen in (it’s going brilliantly!) …

“Yes I’ve been in sales for an extremely long time and reaching out to individual clients instead of organisations was new for me, I’m not afraid of new but you know you go through a process where you’re trying to figure it out and you tweak things and I was really just…

…At that point I was just starting to reach out to people when I started reading your book and I got to a point where I recognised the thing that I was doing wasn’t as effective as I wanted it to be, and so I said ‘okay let’s take that part out of the process, insert the stories’ and it just it changed everything! It was fantastic!

Dude, this is my call plan [shows document] … 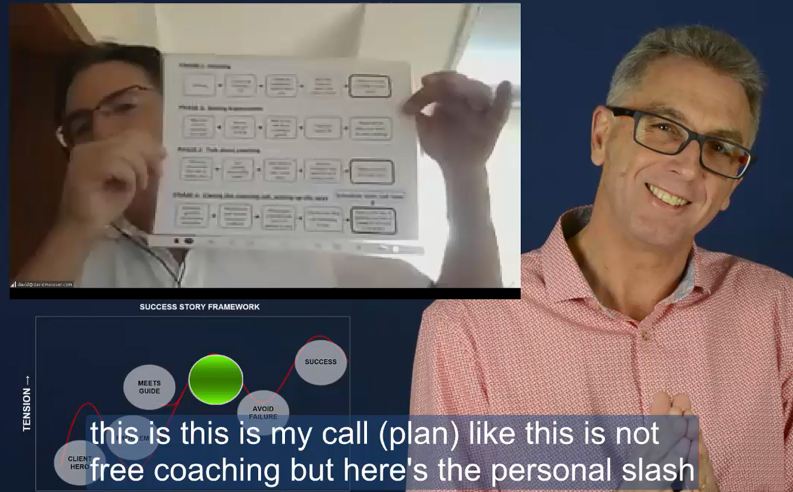 …Like this is not free coaching but here’s the personal/corporate story here’s the insight bit it’s just it’s fun!

And it, I swear it’s just like you say in your book you know like I tell my story and they tell theirs and the stuff that’s in the story of mine relates to what happens later in the call and it’s just like …it’s not shooting fish and it’s not a hundred percent of the time but it just it feels natural and right and it leads you down the right path.

I’m starting to book clients at a pretty nice clip and I’m pretty excited about it because that’s what I set out to do. I don’t want to keep going on about it but a lot of sales books … yours is special, it really is the book really is unique special and useful!”

So that’s the structure of the success story. It starts with your client. I started telling you about David, I didn’t tell you about me or my products and services. David was in a good position, he was competent he was going extremely well and then he struck a problem.

And the problem was that now he had to sell to a different kind of buyer – he needed to figure that out. David met a guide (which was me) and the guide provided a plan. The plan was the plan from the Seven Stories book and a little bit of coaching on his story (because it helps to get a bit of coaching). And by following the plan David avoided failure and achieved success! As he said, in his own words, things are going very well.

That’s the structure of the success story. There are six events and that’s how you tell it.

I wish you well!