Three weeks ago, I started as a Principal at Anecdote. Working with story has been following me my whole life and this is the next exciting step in that journey.

Growing up in regional Australia, I was home-schooled. I was a voracious reader and from 8 years old I’d write stories on the family typewriter. 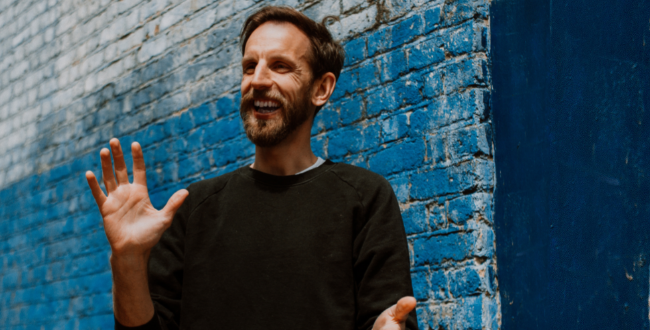 When I was 15, I was living in Tasmania, the southern-most island state of Australia. One night, while hanging out with my friend Damien, he showed me a page of HTML code (the language that powers much of the WWW). It was like seeing the Rosetta Stone in that I didn’t understand it, but I was so excited and sensed so many possibilities. Over that winter, I’d go to Damien’s flat every week. We’d listen to Bon Jovi’s Keep the Faith while he taught me how to code. This led to further study and then a 10-year career in software development.

This may seem like an unlikely start but I continued my interest in narrative during that decade. I read everything I could about writing, story structure and anthropology. When my wife and I moved to London in 2009, I started an improv group with the goal of improvising theatre-quality stories. Something was cooking.

These two worlds: software and story, gradually started to collide. And it was because of this frustration: most of the code that my teams and I wrote was never used in the real world.

A typical example of this was one of the last software projects I worked on. It was 2011 and I was working for an investment advisory out of a basement near St Pauls Cathedral in London. We were building a subscription product that large-scale investors could use to track markets. Every three months we would meet with management to agree what we’d build next.

During this certain meeting, our boss, let’s call him Bernie, wanted a new feature done in a certain way. The whole team, the seven of us, disagreed with him and told him that the only way it would work would be this other way. Bernie pushed back, thinking his way was the right way. It got so heated that eventually Bernie said, “Do it how I want!” and walked out of the room. We did our best over those next three months to write this new feature ‘his way’ like the good developers we were.

The next review meeting with Bernie (my last), he saw what we had done and he was livid! He saw that the new feature couldn’t be released because his way hadn’t worked. He couldn’t admit fault and instead asked why we hadn’t built it the other way—the way we had initially suggested. In that moment, three months of effort went to waste because eight human beings couldn’t come to an agreement.

There are another thirty examples I could share where poor communication led to similarly wasteful situations.

Two years earlier, a friend had let me help them on an organisation change project (which I had taken holidays to do) and I saw that this was something I had both an affinity and capacity for. From that experience and an intuition that stories could be the conduit for mutual understanding, I started my own consultancy, Somekind, in March 2011. I still remember changing my job title on LinkedIn to ‘Storytelling Consultant’ and sitting back and thinking, “Let’s see what that becomes.”

Being in the tech world, my first clients were small start-ups pitching for funding. From that need, the first model I built with Somekind was Five Stories Start-ups Need to Know.

These story types were:

This was my first best guess at what narratives would help people understand each other. I noticed that collecting these stories was very valuable for the entrepreneurs I was coaching. It moved the conversation from asking investors to invest in their product to asking them to invest in them as a person.

However, as I started working with teams in larger organisations, I noticed that no matter how well the frontline workers had a shared understanding of what they were doing, the majority of problems I came across were because of the disconnection between leadership and the frontline (as demonstrated by the Bernie example).

I realised that to have any impact within an organisation I was going to have to take storytelling to the leadership level, but I had no clue where to start. Instead of developing my own product, I cast my net to see what storytelling programs already existed around the world.

This was a long journey, but eventually I came across Storytelling for Leaders by Anecdote. It seemed simple, flexible and, most importantly, impactful. After a few calls and emails, I became a partner with Anecdote and then, a few months later, met Mark Schenk in Amsterdam, where I was accredited to deliver the program.

Over the years delivering this program in the UK and Europe, I never stopped marvelling how stories are memorable and move things forward. For two years in a row, I delivered Storytelling for Leaders for a big four consultancy as part of their leadership training getaway in Reading.

The second year that I turned up, the lead trainer walked up to me excited, recalling two of the most powerful stories told in the room a year earlier. As a demonstration of his organisation’s values, a gay man had related how he felt more accepted in the office than he did walking down the street. The other story was one which explained a technical blockchain solution in a way that anyone could understand.

After 12 years in London, my family and I have returned to Australia. On arriving I called Mark Schenk and he offered me a position within Anecdote.

So as I sit here in the spare bedroom of a rental in Ocean Grove, I am excited to continue my journey with story; especially considering the wealth of experience that surrounds me. One of the first things I have noticed in the meetings I’ve been in is that everyone inside the organisation tells stories on purpose: to be understood, to teach, to inspire.

Rob Grundel is a Principal at Anecdote International. He has coached individual leaders and facilitated rooms around the world for companies like Capco, Siemens and Mastercard. He has helped craft keynotes, strategies, change narratives and ways of working. At the heart of all this work is finding the shared story in the room. Rob is also a practised musician and producer. He is based near Melbourne in Australia.