Step into their SHOES: The critical first step in crafting a narrative 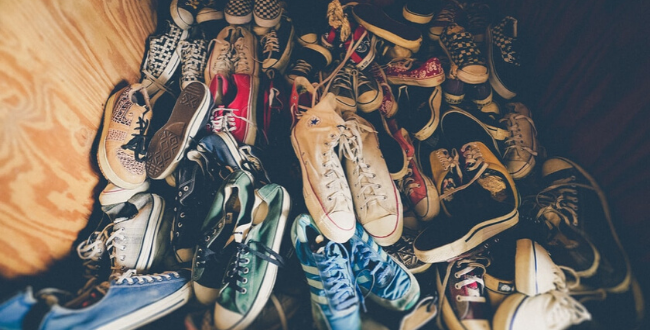 Many years ago I was working for an insurance company in the Sydney central business district. The General Manager of Personal Insurance, let’s call him Keith, got up to present the half yearly performance update to our marketing team. He was all business as he entered the meeting room. Dressed in a formal dark suit, he stood out among the more fashion-conscious social-butterflies of our marketing team. That was not the only contrast. Keith had an actuarial background and numbers spoke more clearly to him than words ever could. Unfortunately, for much of the marketing team the opposite was true.

With no small talk, he proceeded to share detailed slides on risk analytics, supported by a margin analysis for each category of insurance premium. Most of the marketing team quickly returned to their conversations, albeit more quietly. Keith ploughed on for another ten minutes before stopping for questions. There were none. It got worse… Being part of both the marketing and corporate teams, that afternoon, I had the misfortune of hearing the same presentation again. He didn’t change a word!

Executive time and words are precious but often wasted by overlooking their audience. Any Communications 101 course starts with step one being to consider the audience but in practice, few people do it in a methodical way. Only by taking deliberate steps to empathise with your audience can you understand their concerns and aspirations… Or know what content will be relevant to them. So, if you treat step one as a tick-box exercise, it’s likely you will end up as disconnected as Keith!

How do you effectively consider audience concerns?

There are multiple ways to effectively consider audience concerns, but here’s a simple, practical approach: Step into their SHOES.

Begin by segmenting based on the priority audiences for your communication, then identify and answer key questions around audience concerns, preferred communication options, and the call to action you aim to encourage. Once you have a grasp of these different perspectives, you can start narrowing down overarching themes, sifting out those that will appeal to all segments, followed by the development of sub-messages for different segments.

The starting point is to segment the audience into key groups that your communications will target. This allows you to step into the shoes of each segment. It may split out by role, region, seniority, experience, communication style or countless other ways! The point is to choose a segmentation that focuses on the priority audiences for your communication. The Australian office and the Singapore office may require very different narratives but, if there’s only 3 people in Singapore, that segmentation would be futile. Instead, a better segmentation may be by role type or seniority level.

In 2016, I was consulting to the Chief Medical Officer of a biotech firm in California. Karen (not her real name) was preparing communications to launch a new type of drug development that applied real-world-data (RWD) instead of relying solely on clinical trials. There were multiple stakeholders to influence so we segmented the audience into three priority groups:

We then created personas of typical members of each segment. For example, Dr John Jenson, a 57-year-old General Practitioner who manages five medical practices, places great importance on his patient experience, won’t take unnecessary risks, is sceptical of big pharma and many other realistic details. This gave us a useful frame of reference when considering medical stakeholder concerns. Soon, executives at the biotech company were asking, “What would Dr J think if we did X, Y, Z?”—the audience perspective became deeply embedded in the culture. Our personas were fictional in this case but it’s preferable to use real people when possible.

Once you have identified the 2-3 main audience segments, it’s time to dive into both the broad and specific concerns (or aspirations) they may have in relation to your topic.

You can begin with broad questions: What keeps them up at night? What gets them excited? What does success look like?

Then get increasingly more specific: What KPIs are they focused on? What testing concerns do they have with RWD? How will RWD impact their business model? Is RWD riskier than other methods? Will they get a fair price? How will this improve patient outcomes?

As you consider the perspective of different audiences, a series of anti-stories will surface. These are existing narratives, usually negative, that audiences will be running in their heads as you begin to communicate. It’s worth cataloguing these and countering them with alternate stories that open their mind to your messages.

Keith, the insurance GM, had the deck stacked against him from the moment he entered the room. Most of the marketing team brushed him off as a numbers man with no appreciation of their roles. He would have done well to admit this and tell a true story of how he was open to learning more about the value of marketing. Or better still, find a true story that shows how he has started to understand its value. Then he may have a had a chance to connect, rather than making vague assertions about the value of the marketing team’s work.

Next, identify and open up communication options—the preferred styles of communication that your audience will gravitate to. What type of language and tone will they go for? What type of examples would they be interested in? Which channels is our narrative best suited to for this audience? What should we avoid?

Most executive communications vary little by audience. Often it’s just a cut and paste exercise like I experienced at the insurance company. Marketing gets the same message as Human Resources… Front Line Sales hears the same stats as Back Office IT… Or the language used in the formal Singapore office is the same as the type used in the colloquial Sydney HQ.

In contrast to Keith, with a bit of forethought, Karen, the Chief Medical Officer, opened up different options for communicating to different audiences. The overarching message was aligned but the way she phrased and delivered it to audiences varied significantly thanks to a detailed pre-assessment of audience communication preferences.

Karen was an academic herself. When she spoke to Oncology researchers she delved deep into the technicalities of RWD and showed efficacy models that sparked plenty of conversation. When she presented to the marketing team, she was far more animated, using more action oriented examples and informal language. She only had a few, largely visual slides and used emotive language to share how she felt about the possibilities of RWD. Karen also introduced a number of patient success stories that resonated strongly. When it came to the commercial sales reps, we created an app with a matrix of messages they could access on their beloved devices in short, punchy phrases. In contrast, the regulatory team received more detailed communications, highlighting the nuances of different approaches and providing access to a legal library of terms.

Effective communications inspire action. For different audiences the call to action will vary but should be given forethought. What do we want them to think, feel, know, and do? Which behaviours do we a want them to change? What will success look like in 1, 6, 12 months for a particular audience?

It’s helpful to set up a major From > To behavioural shift that you are looking for. It may be to shift from being gatekeepers to guides. Or from being risk averse to cautiously creative. Or from focused on customer acquisition to placing greater emphasis on customer retention. These calls to action can’t fizzle after the initial communication. Instead, consider how they will be maintained in the practical reality of audiences’ day jobs. If they are being remunerated for customer acquisition, once the shift to emphasise retention has been communicated, the remuneration structure better shift as well or leaders will quickly lose credibility! Consider what practical steps you can share with your audience to demonstrate that the call to action will be backed up by management in practice.

Finally, don’t forget the value of a vigorous Q&A interaction. Step into the audiences shoes and identify the top five questions they are likely to ask. They say Winston Churchill spent the most time practicing his impromptu speeches… A well prepared communicator will have the answers to likely audience questions ready to go!

Once you have cast the net wide and identified different questions, it’s time to start narrowing. You can’t address every concern of every segment—so it becomes an exercise in creatively funnelling the key themes that will resonate with the audience segments. The high level themes should be consistent across all segments but you can get more targeted as the audience becomes more distinct and develop sub-messages.

In the case of the Chief Medical Officer, her major theme was around speed of drug development. However, to regulatory audiences she drilled down into concerns on balancing speed and process checks, while for medical practitioners she emphasised what speed of drug development would mean for patient outcomes and practice revenues. A hierarchy of themes targeted to audience segments will help guide your narrative. You can then tweak particular presentations to address anti-stories, communication styles and calls to action.

Finally, don’t forget that, once your narrative is developed, it’s not the end of the need to empathise with the audience. A frequently ignored step is to road test any communications or key messages with your audience. In fact, the biotech firm we set up and affectionately labelled ‘Rogue Group’ would test out any major narratives or messaging with audience segments and report back to management—which parts resonated and which parts fell flat. It’s hard to argue with direct feedback from the audience themselves!

Initially, executives were sceptical of the Rogue Group but soon they came to see it as the best way to keep a pulse on how their teams were feeling. Equipped with the perceptions of different employee segments, the narrative was refined to remove corporate jargon, emphasise relevant themes, and focus on anecdotes that were meaningful to employees.

At Anecdote, we have multiple programs on creating narratives and using story-powered communications, however, we never lose sight of step one: Step into their SHOES.

We’re running a series of virtual Storytelling for Leaders and Story-Powered Sales workshops over the next month. If you’re interested in attending one of our workshops, head to our events page for more information.

Share
Share
Pin
Email
Print
Tags: Communication, Narrative
Comments Off on Step into their SHOES: The critical first step in crafting a narrative