Adapting a podcast story to use at work

The most successful podcasts feature stories, but podcast stories often contain more details and are longer than what you would tell orally at work to make a business point.

In this post, I’m going to show you how to adapt a podcast story so you can tell it at work to make a point and get an idea to stick. Remember that a good business story is about 1 to 4 minutes long and has a single, clear business point. You don’t want to tell a Grandpa Simpson onion story (thanks Rod Rothwell). 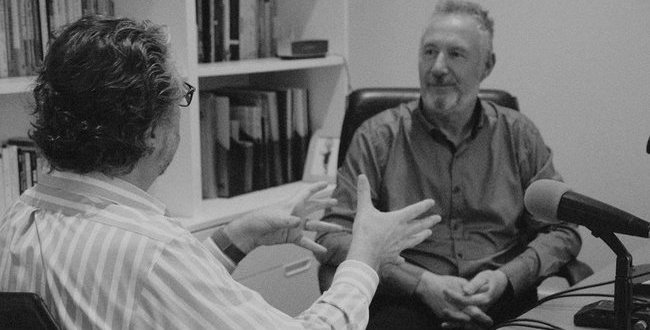 I have the perfect podcast series for us to practise with. Cautionary Tales is a new podcast by journalist and author Tim Harford. A cautionary tale is a story about something that went wrong and which teaches us a useful lesson, so that we might avoid making the same mistake.

Sometimes Tim tells a single story in an episode to make his point, such as in ‘DANGER: Rocks Ahead!’, where he talks about an oil tanker that crashed onto rocks in the middle of the day.

And sometimes he tells multiple shorter stories, often intertwined, to make his point, such as in the episode ‘La La Land: Galileo’s Warning’. We’ll focus on this episode for this exercise.

The process we’re going to follow has four steps:

Listen to the podcast episode and notice the stories

‘La La Land: Galileo’s Warning’ is 35 minutes long and thoroughly enjoyable. As you listen to the episode, spot the stories – here some pointers on spotting stories.

OK, stop reading this post now and take a listen.

Did you find the stories? There are five in total:

Work out the business points

Four business points were raised in the episode (you might be able to identify more):

The first point is probably too small to illustrate with a story. The point doesn’t warrant the effort.

Points two, three and four, however, are terrific points to make at work. I can imagine defending a knee-jerk reaction to blame someone for an error and telling the Dunaway and Beatty story to get people to slow down and look at the system. And this same story is great for illustrating the importance of design – don’t put the least important information in the largest font.

The last point, that some things designed for safety make things unsafe, is the major idea running through the episode. Let’s focus on this one as a story to tell at work.

Choose a story or stories to retell

I think we should tell the Dunaway and Beatty story, with all its twists and turns (that’s what makes it a good story), to make the point that some things designed for safety make things unsafe.

I’m thinking this story will resonate because it’s quite well known, accessible (many people will remember what happened on that Oscars night), and it’s surprising that a pop culture reference can illuminate an important business point.

I’m a big believer in telling a business audience the point of a story before I tell it, so they know why they are listening to it. Point, then story. So I would start our story like this:

One thing we need to keep in mind is that some things designed for safety can make things unsafe.

Then I’d go straight into the story. Now this one is spread across the entire podcast episode. But I think that, for a business story, it’s better to do a straight-down-the-line recount, taking some of the dramatic elements provided by Tim. I’ll point out these elements as we go.

Who remembers the Oscars in 2017, when Faye Dunaway and Warren Beatty presented the award for Best Picture?

Recreating the moment when Beatty gets confused has set up the story nicely.

The cast and crew of La La Land stream onstage and are starting their acceptance speech when they are told by the organisers that the wrong card has been read out and the actual winner is Moonlight.

Whenever things go wrong, we want someone to blame. Our first instinct here is to blame Beatty and Dunaway. But that’s a mistake. We learn that the PwC accountant Brian Cullinan handed Beatty the wrong envelope. So he must be the culprit. Again, it’s not the whole story.

Here we are creating some mystery. You want your audience thinking, ‘So what did happen?’

To really understand what happened, we need to go deeper.

Beatty hesitated because he was given the envelope for Best Actress, won by Emma Stone for her performance in La La Land. This confused him. He could see Emma’s name on the card and ‘La La Land’.

What was going on? He couldn’t understand what he was seeing. When he showed the card to Dunaway, all she saw was ‘La La Land’ and just read it out.

Now Best Actress had just been announced by Leonardo DiCaprio. So how did the card he just read out end up in Beatty’s hands? Well, it didn’t.

Brian Cullinan was one of two accountants looking after the awards envelopes. The other was Martha Ruiz. Each had their own duplicate set of awards envelopes to ensure there was always a backup. When Martha handed Leo the Best Actress envelope, Brian was supposed to set aside his copy and then hand Beatty the Best Picture envelope. But Brian was busy taking a photo of Emma Stone with her Oscar backstage and missed the set-aside.

Accident expert Charles Perrow, in his book Normal Accidents, identifies two characteristics of systems that increase the likelihood of accidents.

And two, complexity, where things emerge in unexpected ways because there are so many moving parts. Just imagine the parts in motion backstage at the Academy Awards.

We are now out of the story, sharing Perrow’s insight, giving the story research credibility and making the main point.

In an attempt to create a fail-safe, the Academy’s duplicate envelopes only served to increase complexity and, as Perrow points out, if the system is tightly coupled AND complex, it will fail eventually.

Here is where we make the point of the story. The Academy designed for safety, yet made things unsafe.

After the dust had settled, Vanity Fair reported that the Academy had devised a plan to avoid future bungles. First step was to get rid of Brian and Martha. Another was to add a third accountant who would sit in the event control room with a third set of duplicate awards envelopes.

We finish the story with the Academy doing the opposite of what the accident researchers would recommend, giving the audience a chuckle and a smug feeling of ‘That’s typical’. Remember, lives are not at risk here.

Let me know how you go learning this story and what happens when you tell it to your colleagues. I can just imagine the conversation that will flow from it.

Share19
Share
Pin
Email
Print
Tags: La La Land
Comments Off on Adapting a podcast story to use at work