Storytelling techniques that get people’s attention

Narrative is the oldest and most compelling method of holding someone’s attention; everybody wants to be told the story. Always look for ways to convey your information in narrative form.1

Many years ago, I worked on a big consulting project with a brilliant engineer who had a bad stutter. I noticed that in meetings he would use the stutter as a way of maintaining ‘the floor’. He would make a point and then “aaaaaaaaaaaaaaah” and would continue with his line of thought.

When I mentioned this observation to him, he explained that in meetings, and in conversation more generally, what normally happens is that as soon as someone takes a breath or pauses, someone else will start talking. The net effect was that nobody got to finish saying anything and very little progress was made. By using the stutter to his advantage, he was able to communicate coherent messages on complex issues without constant interruption. He explained “people are too polite to interrupt when I am stuttering. I get the opportunity to think about what I’m saying and carefully formulate my thoughts.”

I was impressed. He had turned the disability into an advantage. 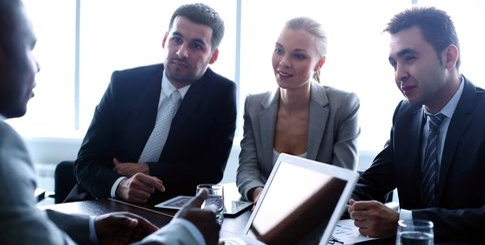 But it also got me thinking. I watched people’s behaviour in meetings and almost invariably someone else would start talking as soon as there was any hesitation or pause when someone else was talking. It wasn’t that the speaker lost people’s attention, it was like they never had their attention in the first place. The audience weren’t listening, they were thinking of what they wanted to say and were waiting for the opportunity to do so.

But, the observations above only apply when we were doing what we normally do in meetings: sharing perspectives (opinions), making assertions, sharing data and our conclusions, normally in the form of generalisations. It’s a very different effect when you are sharing examples (stories). A story is like a promise: a series of events occur that culminate in something. If you are telling a story, and stop halfway through, people will be leaning forward, asking “what happened?”

I was at a conference two weeks ago talking with Andrew O’Keefe, Director of Hardwired Humans. I’ve known Andrew for several years and attended his Human Instincts workshop at Taronga zoo. I was explaining this feature of stories to him and he came to me the next day and gave the following example of where this had happened to him:

A few years ago I was being interviewed on radio. I was sitting at home in Sydney and the host was on the phone from regional Western Australia. We were talking about leadership and instincts as part of my book promotion campaign. Unfortunately, in the middle of the interview, part-way through a story I was telling, the phone-line dropped out. As the interview was running up to the 7:30am news bulletin I assumed that that was the end of the interview. But the program producer rang me back a few moments later. She said that their switch-board had lit up with calls when we were cut off – their listeners wanted to hear the end of the story! She hoped that we could continue the interview. Of course! So after the news we continued on and I finished that story and told a few others about leadership.

Andrew published this story earlier this week in his monthly newsletter. What he didn’t say was that he was pretty sure he was telling a story about an alpha male gorilla that had a three-step disciplinary process for the members of his tribe and what happened when one of the other males crossed the line to stage three. Who wouldn’t want to hear that?

The point is that normally people are just waiting for you to finish so they can start talking. You can change the game by finding examples that illustrate your point and then following with the facts or logical argument you want to make. Examples (stories, vignettes, anecdotes) are not alternatives to facts – they are great vehicles for conveying them. The best way to think of stories: they are facts, wrapped in context and delivered with emotion. They are also the best way of getting and holding your audience’s attention.