Business storytelling training in The Netherlands

I visited Amsterdam in early April and met Paul Joosten and Ronald van Domberg. Both fabulous facilitators and both working in the story field. Within a few months they had become Partners in delivering the Storytelling for Leaders program and had completed their accreditation.

While many programs in The Netherlands are delivered in English, there is a strong preference in smaller organisations for programs to be delivered in Dutch. So, the Dutch translation has been completed and its first public outing will happen on 10 December. 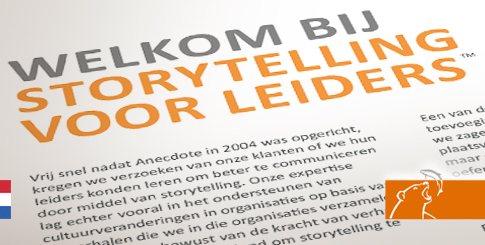 We regularly run public workshops in Australia so people get the opportunity to experience our Storytelling for Leaders™ program. Over the next few months there will be plenty of opportunity to learn how to be an effective business storyteller in The Netherlands. Here are the program dates:

Both Paul and Ronald have delivered the program in English and it’s great that they now have the materials to deliver it in their native tongue. If you are located in The Netherlands or nearby, this is a great opportunity to build your storytelling skills and learn how stories can help you tackle some of the fundamental challenges in communicating more effectively.