Making headway in a new network 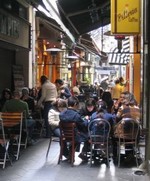 A first day at a new organisation is often daunting. Apart from just getting up to speed with what you are supposed to be doing you are also trying to find out who you need to know. In a connected world your social network will be one of your most valuable assets.

Much has been learnt about the characteristics of social networks ever since Euler proved it was impossible to cross all seven Konigsberg bridges without crossing the same bridge twice. Here are a few things everyone should know about social networks:

These network facts suggest the odds are stacked against a new starter in terms of forming social networks, at least from a perspective of becoming a hub or a connector. But luckily there are others factors at play. Albert-Laszlo Barabasi pinpoints ‘fitness’ as the other key factor affecting a person’s ability to connect. Some people have characteristics which make them natural connectors—great memories for names, likeable personalities, curiosity, humility, openness. In most organisational cultures roles and status have an enormous impact. While other people systematically foster their networks. Keith Ferrazzi’s book, Never Eat Alone, provides such an approach. Each of these examples, however, concentrate on increasing your ‘hubness’. But how else can you increase your impact in a network?

As organisations begin to understand their social networks they are realising the important role boundary spanners play. These people act as a bridge from one part of the organisation to another. Providing a conduit, therefore, for relationships between disparate parts of an organisation is another way to positively effect the network and make a difference in the organisation. It’s at the intersection of disciplines, for example, where creativity often flourishes. In a follow up post I will talk about identifying these network gaps and how you might fill them.

2 Responses to “Making headway in a new network”